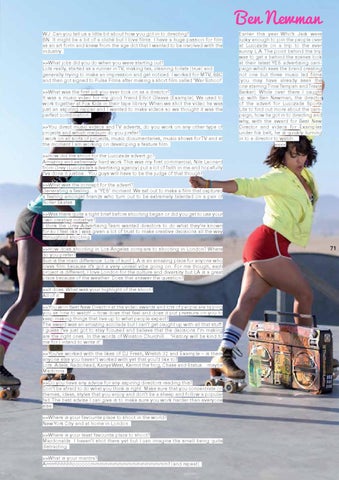 WJ: Can you tell us a little bit about how you got in to directing? BN: It might be a bit of a cliché but I love films. I have a huge passion for film as an art form and knew from the age dot that I wanted to be involved with the industry. &gt;&gt;What jobs did you do when you were starting out? Lots really, started as a runner in TV, making tea, cleaning toilets (true) and generally trying to make an impression and get noticed. I worked for MTV, BBC and then got signed to Pulse Films after making a short film called ‘War School’. &gt;&gt;What was the first job you ever took on as a director? It was a music video for my good friend Elliot Gleave (Example). We used to work together at Fox Kids in their tape library. When we shot the video he was just an aspiring rapper and I wanted to make videos so we thought it was the perfect combination. &gt;&gt;You direct music videos and TV adverts, do you work on any other type of projects and which medium do you prefer? I work on all sorts of projects, music documentaries, music shows for TV and at the moment I am working on developing a feature film.

Earlier this year Who’s Jack were lucky enough to join the people over at Lucozade on a trip to the ever sunny L.A. The point behind the trip was to get a behind the scenes look at their latest YES advertising campaign which sees the brand creating not one but three music led films (you may have already seen the one starring Tinie Tempah and Travis Barker). While over there I caught up with Ben Newman, the director of the advert for Lucozade Sports Lite to find out more about the campaign, how he got in to directing and why, with the award for Best New Director and videos for Examples under his belt, he is quickly turning in to a director to watch… &lt;&lt;&lt;&lt;

&gt;&gt;How did the shoot for the Lucozade advert go? Amazing and extremely hard work. This was my first commercial, Nils Leonard from Grey (Lucozade’s advertising agency) put a lot of faith in me and hopefully I’ve done it justice... You guys will have to be the judge of that though! &gt;&gt;What was the concept for the advert? Generating a feeling... a ‘YES’ moment. We set out to make a film that captured a feeling amongst friends who turn out to be extremely talented on a pair of Roller Skates. &gt;&gt;Was there quite a tight brief before shooting began or did you get to use your own creative initiative? I think the Grey Advertising Team wanted directors to do what they’re known for so I feel like I was given a lot of trust to make creative decisions all the way throughout shooting. &gt;&gt;How does shooting in Los Angeles compare to shooting in London? Where do you prefer? Sun is the main difference. Lots of sun! L.A is an amazing place for anyone who loves film because it’s got a very unreal vibe going on. For me though, each project is different, I love London for the culture and diversity but LA is a great place because of the weather. Does that answer the question? &gt;&gt;It does. What was your highlight of the shoot? All of it... &gt;&gt;You won Best New Director at the video awards and lots of people are tipping you as ‘one to watch’ – how does that feel and does it put pressure on you to keep making things that live up to what people expect? The award was an amazing accolade but I can’t get caught up with all that stuff. I guess I’ve just got to stay focused and believe that the decisions I’m making are the right ones. In the words of Winston Churchill… ‘History will be kind to me for I intend to write it’. &gt;&gt;You’ve worked with the likes of DJ Fresh, Wretch 32 and Example – is there anyone else you haven’t worked with yet that you’d like to? Lots. Adele, Radiohead, Kanye West, Kermit the frog, Chase and Status... maybe Madonna. &gt;&gt;Do you have any advice for any aspiring directors reading this? Don’t be afraid to do what you think is right. Make sure that you concentrate on themes, ideas, styles that you enjoy and don’t be a sheep and follow a popular fad. The best advise I can give is to make sure you work harder than everyone else. &gt;&gt;Where is your favourite place to shoot in the world? New York City and at home in London. &gt;&gt;Where is your least favourite place to shoot? Macdonalds. I haven’t shot there yet but I can imagine the smell being quite distracting. &gt;&gt;What is your mantra? Arrrrrhhhhhhoooooommmmmmmmmmmmmmmmm! (and repeat).

Who's Jack with a new logo and new news 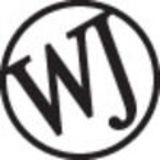