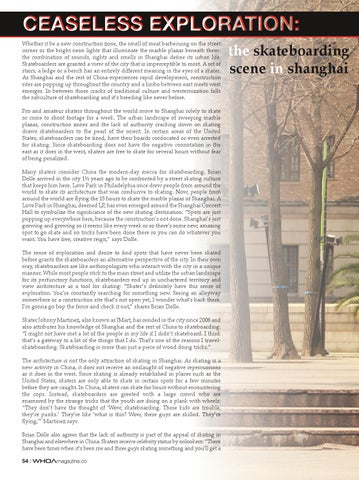 Whether it be a new construction zone, the smell of meat barbecuing on the street corner or the bright neon lights that illuminate the marble plazas beneath themthe combination of sounds, sights and smells in Shanghai define its urban life. Skateboarders are granted a view of the city that is imperceptible to most. A set of stairs, a ledge or a bench has an entirely different meaning in the eyes of a skater. As Shanghai and the rest of China experiences rapid development, construction sites are popping up throughout the country and a limbo between east meets west emerges. In between those cracks of traditional culture and westernization falls the subculture of skateboarding and it’s breeding like never before. Pro and amateur skaters throughout the world move to Shanghai solely to skate or come to shoot footage for a week. The urban landscape of sweeping marble plazas, construction zones and the lack of authority cracking down on skating draws skateboarders to the pearl of the orient. In certain areas of the United States, skateboarders can be fined, have their boards confiscated or even arrested for skating. Since skateboarding does not have the negative connotation in the east as it does in the west, skaters are free to skate for several hours without fear of being penalized. Many skaters consider China the modern-day mecca for skateboarding. Brian Dolle arrived in the city 1½ years ago to be confronted by a street skating culture that keeps him here. Love Park in Philadelphia once drew people from around the world to skate its architecture that was conducive to skating. Now, people from around the world are flying the 15 hours to skate the marble plazas of Shanghai. A Love Park in Shanghai, deemed LP, has even emerged around the Shanghai Concert Hall to symbolize the significance of the new skating destination. “Spots are just popping up everywhere here, because the construction’s not done. Shanghai’s just growing and growing so it seems like every week or so there’s some new, amazing spot to go skate and no tricks have been done there so you can do whatever you want. You have free, creative reign,” says Dolle. The sense of exploration and desire to find spots that have never been skated before grants the skateboarders an alternative perspective of the city. In their own way, skateboarders are like anthropologists who interact with the city in a unique manner. While most people stick to the main street and utilize the urban landscape for its perfunctory functions, skateboarders end up in unchartered territory and view architecture as a tool for skating: “Skater’s definitely have this sense of exploration. You’re constantly searching for something new. Seeing an alleyway somewhere or a construction site that’s not open yet, I wonder what’s back there. I’m gonna go hop the fence and check it out,” shares Brian Dolle. Skater Johnny Martinez, also known as JMart, has resided in the city since 2008 and also attributes his knowledge of Shanghai and the rest of China to skateboarding: “I might not have met a lot of the people in my life if I didn’t skateboard. I think that’s a gateway to a lot of the things that I do. That’s one of the reasons I travelskateboarding. Skateboarding is more than just a piece of wood doing tricks.” The architecture is not the only attraction of skating in Shanghai. As skating is a new activity in China, it does not receive an onslaught of negative repercussions as it does in the west. Since skating is already established in places such as the United States, skaters are only able to skate in certain spots for a few minutes before they are caught. In China, skaters can skate for hours without encountering the cops. Instead, skateboarders are greeted with a large crowd who are enamored by the strange tricks that the youth are doing on a plank with wheels: “They don’t have the thought of ‘Wow, skateboarding. These kids are trouble, they’re punks.’ They’re like ‘what is this? Wow, these guys are skilled. They’re flying,’” Martinez says. Brian Dolle also agrees that the lack of authority is part of the appeal of skating in Shanghai and elsewhere in China. Skaters receive celebrity status by onlookers: “There have been times when it’s been me and three guys skating something and you’ll get a 54 | whoamagazine.co

the skateboarding scene in shanghai