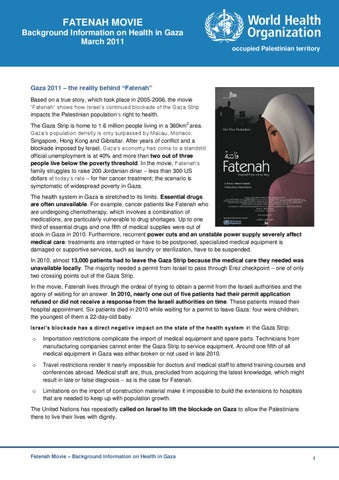 Gaza 2011 – the reality behind “Fatenah” Based on a true story, which took place in 2005-2006, the movie “Fatenah” shows how Israel’s continued blockade of the Gaza Strip impacts the Palestinian population’s right to health. 2

The Gaza Strip is home to 1.6 million people living in a 360km area. Gaza’s population density is only surpassed by Macau, Monaco, Singapore, Hong Kong and Gibraltar. After years of conflict and a blockade imposed by Israel, Gaza’s economy has come to a standstill: official unemployment is at 40% and more than two out of three people live below the poverty threshold. In the movie, Fatenah’s family struggles to raise 200 Jordanian dinar – less than 300 US dollars at today’s rate – for her cancer treatment; the scenario is symptomatic of widespread poverty in Gaza. The health system in Gaza is stretched to its limits. Essential drugs are often unavailable. For example, cancer patients like Fatenah who are undergoing chemotherapy, which involves a combination of medications, are particularly vulnerable to drug shortages. Up to one third of essential drugs and one fifth of medical supplies were out of stock in Gaza in 2010. Furthermore, recurrent power cuts and an unstable power supply severely affect medical care: treatments are interrupted or have to be postponed, specialized medical equipment is damaged or supportive services, such as laundry or sterilization, have to be suspended. In 2010, almost 13,000 patients had to leave the Gaza Strip because the medical care they needed was unavailable locally. The majority needed a permit from Israel to pass through Erez checkpoint – one of only two crossing points out of the Gaza Strip. In the movie, Fatenah lives through the ordeal of trying to obtain a permit from the Israeli authorities and the agony of waiting for an answer. In 2010, nearly one out of five patients had their permit application refused or did not receive a response from the Israeli authorities on time. These patients missed their hospital appointment. Six patients died in 2010 while waiting for a permit to leave Gaza: four were children, the youngest of them a 22-day-old baby. Israel’s blockade has a direct negative impact on the state of the health system in the Gaza Strip: o

Importation restrictions complicate the import of medical equipment and spare parts. Technicians from manufacturing companies cannot enter the Gaza Strip to service equipment. Around one fifth of all medical equipment in Gaza was either broken or not used in late 2010.

Travel restrictions render it nearly impossible for doctors and medical staff to attend training courses and conferences abroad. Medical staff are, thus, precluded from acquiring the latest knowledge, which might result in late or false diagnosis – as is the case for Fatenah.

Limitations on the import of construction material make it impossible to build the extensions to hospitals that are needed to keep up with population growth.

The United Nations has repeatedly called on Israel to lift the blockade on Gaza to allow the Palestinians there to live their lives with dignity. 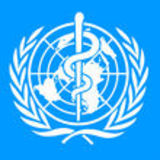 The animation movie "Fatenah" tells the story of a young woman from Gaza in need of cancer treatment, which is unavailable locally. Based on...

The animation movie "Fatenah" tells the story of a young woman from Gaza in need of cancer treatment, which is unavailable locally. Based on...