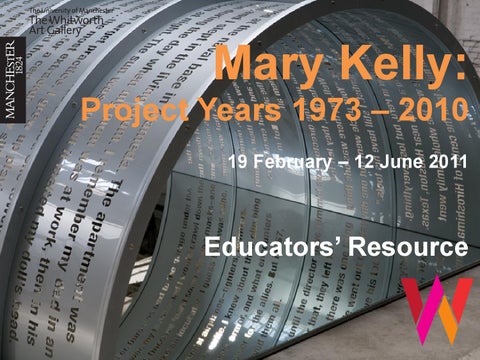 Mary Kelly: A brief introduction The American artist Mary Kelly was first brought to the public’s attention after the media’s response to her work Post-Partum Document in 1976 whilst exhibiting at The ICA, London. Post-Partum Document (1973-79) is a series about motherhood, documenting Kelly’s relationship and observations of her child. This was particularly interesting as the series presented observations from child, mother and father combined with psychoanalytical perspectives, in the form of texts and objects to create a narrative. Mary Kelly was interested in psychoanalytical theory to further understand human behaviour, and used it to add credence to her practice, so that the voices in her work are not simply personal. This approach is found within all of Kelly’s work. Most of Mary Kelly’s work contains text, raising questions rather than providing answers. She rarely works with figurative images, preferring to use a variety of other combined forms, such as object and text, where the viewer creates the image in their mind. This allows the viewer to have a more personal response to the artworks and requires the viewer to spend time with the works to gain a better understanding. 3

Post Partum Document 1973-9 – A work made up of a series which broke the taboo of motherhood in contemporary, critical art practice. Interim 1984-85 – a series of works which explores the post-maternal role of women as they enter middle age. It is made up of four parts: Corpus, Pecunia, Historia and Potestas. Interim, Part 1: Corpus is currently on display at the Whitworth. Gloria Patri, 1992 – An analysis of the masculinity complex in men and women against the backdrop of the Gulf War The Ballad of Kastriot Rexhepi, 2001 – This piece is a collaboration between Mary Kelly, composer Michael Nyman and soprano Marie Angel. It is developed from an article found by Mary Kelly in the Los Angeles Times. The story was of a Kosovo-Albanian infant who is found by the Serbian army and re-named, the child is then taken by NATO forces and re-named once again before returning to its true family. The piece explores the relationship between identity, ethnicity and language – how a name and language can shape your identity. Love Songs 2005-7 – This series of works comprises of pieces which refer to the demonstrations and the protests which took place in the Seventies and examines whether that had an impact on the following generations. For example, Multi-Story House, where views of women from the seventies are presented in laser-etched form onto Perspex inside the house structure, with the voices of their daughters’ generation presented on the outside. Habitus 2010 – This piece takes the form of an Anderson shelter and is a collaboration between Mary Kelly and Ray Barrie. Questions and perceptions of war are presented through text cut into the Anderson structure. The text is read via the large mirror under the shelter, placing the viewer amongst the text.

Use of text Mary Kelly uses text in most of her work. She uses it in a variety of ways, employing different techniques and materials. It is by juxtaposing objects, found text, documented conversations and observations that Mary Kelly presents an image. The selection of words is very specific, almost scientific, choosing to combine psychoanalytical language with the recording of data and observations. A pattern of three emerges in Mary Kelly’s work – three languages; three ways to present an idea; three people; three panels. Post-Partum Document: Documentation VI appears to take the form of a ‘mini’ Rosetta Stone, where the same text was presented in three different scripts and provided the key to understanding Egyptian Hieroglyphs. In PPD: Documentation VI, the three scripts help us to understand the development of a child’s language.

Explanation of Techniques Laser Cutting This technique was originally used for industrial applications. Laser cutting works by directing the output of a high power laser, by computer, at the material to be cut. The material then either melts, burns, vaporises away or is blown away by a jet of gas. It leaves the edge with a high quality surface finish. (Multi-Story House, Habitus)

Typewriting The text is created by a mechanical device with keys that, when pressed causes characters to be printed on a medium such as paper. (Post-Partum Document)

Etching The process of using strong acid to cut into the unprotected parts of a metal surface to create a printing plate. An acid-resistant substance is coated over the metal surface. This is then drawn on with an etching needle. The plate is placed into an acid bath. The acid eats into the exposed areas to reveal the drawn image. (Gloria Patri)

Screen Printing This is a printmaking medium based on the simple idea of the stencil and uses a woven mesh screen to support the ink-blocking stencil. The artist makes a stencil and places it on the the screen. Ink is forced through the screen with a squeegee. Photo stencils can also be used which allow photographic images to be part of the print. (Interim, Corpus) 11

Intaglio Printing The word intaglio means ‘incision’ in Italian. For this technique the image is created by making incisions or fine cuts into the surface of a printing plate. The plates are commonly made from copper and zinc. The image is carved into the surface by either etching, engraving, dry point, aquatint or mezzotint. To print, ink is applied to the surface and then rubbed with a cloth to remove the excess. A final wipe is often done with newspaper, leaving ink only in the incisions. A damp piece of paper is placed on top and the plate and paper are run through a printing press, where the pressure transfers the ink from the plate onto the paper. (Vox Manet)

Embossing This is a technique that is achieved by applying heat and pressure to a substrate, such as paper (or lint in Mary Kelly’s case) to create a raised image higher than the substrate. In printing, this technique is accomplished on a letter press. Most types of paper can be embossed. Embossing without ink, so that the image is raised but not coloured, is called blind embossing. (The Ballad of Kastriot Rexhepi)

Handwriting/Calligraphy Handwriting can take many forms and can be interpreted to give the reader an insight into the writer’s personality. Calligraphy is a more formal, decorative way of writing which contains flourishes using an ink scribe. Mary Kelly uses handwriting to show the viewer that the presented thoughts are filtered through another’s eyes and not to be taken as a literal fact. (Post-Partum Document, Vox Manet)

The Ballad of Kastriot Rexhepi, 2001

Questions to consider •  Why does Mary Kelly use a variety of techniques? •  What do you associate with these techniques? •  Is Mary Kelly’s selection of text medium, whether it is typed, etched, etc., related to the time that she made the work? For example would Mary Kelly use computer printed text instead of typewritten text if the work was made today rather than in the Seventies? Consider the context. •  Why does Mary Kelly use text in most of her works? •  Consider why Mary Kelly combines text and image within her practice? •  Do you think that the viewer should invest a lot of time reading and looking at her work, rather than a quick glance at the installation?

Themes and Methodology Themes to explore

Optional Extras Portfolio Development Days FREE Opportunities for Key Stage 4 students to work with an artist and undergraduate students to develop their work. Your students will be introduced to Mary Kelly’s work and shown new ways to develop ideas, and participate in a practical workshop using print, textiles or drawing. Choose from the following dates: Wednesday 11 May 10 – 3 Thursday 12 May 10 – 3 Tuesday 17 May 10 – 3 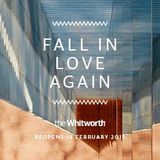 A resource for educators.

A resource for educators.