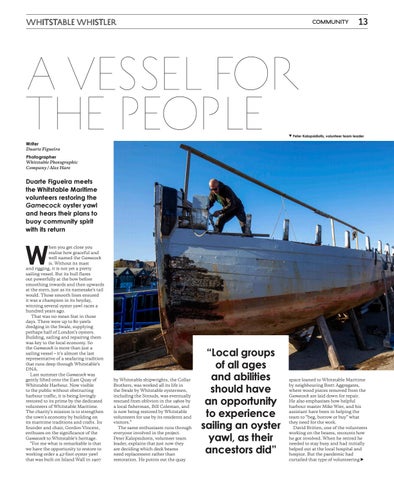 a vessel for the people

hen you get close you realise how graceful and well named the Gamecock is. Without its mast and rigging, it is not yet a pretty sailing vessel. But its hull flares out powerfully at the bow before smoothing inwards and then upwards at the stern, just as its namesake’s tail would. Those smooth lines ensured it was a champion in its heyday, winning several oyster yawl races a hundred years ago. That was no mean feat in those days. There were up to 80 yawls dredging in the Swale, supplying perhaps half of London’s oysters. Building, sailing and repairing them was key to the local economy. So the Gamecock is more than just a sailing vessel – it’s almost the last representative of a seafaring tradition that runs deep through Whitstable’s DNA. Last summer the Gamecock was gently lifted onto the East Quay of Whitstable Harbour. Now visible to the public without obstructing harbour traffic, it is being lovingly restored to its prime by the dedicated volunteers of Whitstable Maritime. The charity’s mission is to strengthen the town’s economy by building on its maritime traditions and crafts. Its founder and chair, Gordon Vincent, enthuses on the significance of the Gamecock to Whitstable’s heritage. “For me what is remarkable is that we have the opportunity to restore to working order a 42-foot oyster yawl that was built on Island Wall in 1907

by Whitstable shipwrights, the Collar Brothers, was worked all its life in the Swale by Whitstable oystermen, including the Strouds, was eventually rescued from oblivion in the 1960s by a local fisherman, Bill Coleman, and is now being restored by Whitstable volunteers for use by its residents and visitors.” The same enthusiasm runs through everyone involved in the project. Peter Kalopsidiotis, volunteer team leader, explains that just now they are deciding which deck beams need replacement rather than restoration. He points out the quay

“Local groups of all ages and abilities should have an opportunity to experience sailing an oyster yawl, as their ancestors did”

space loaned to Whitstable Maritime by neighbouring Brett Aggregates, where wood pieces removed from the Gamecock are laid down for repair. He also emphasises how helpful harbour master Mike Wier, and his assistant have been in helping the team to “beg, borrow or buy” what they need for the work. David Britten, one of the volunteers working on the beams, recounts how he got involved. When he retired he needed to stay busy and had initially helped out at the local hospital and hospice. But the pandemic had curtailed that type of volunteering ► 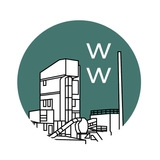