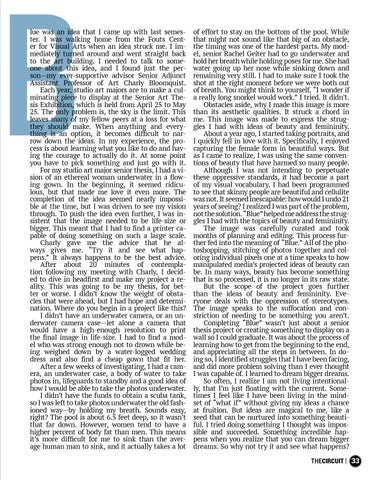 lue was an idea that I came up with last semester. I was walking home from the Fouts Center for Visual Arts when an idea struck me. I immediately turned around and went straight back to the art building. I needed to talk to someone about this idea, and I found just the person—my ever-supportive advisor Senior Adjunct Assistant Professor of Art Charly Bloomquist. Each year, studio art majors are to make a culminating piece to display at the Senior Art Thesis Exhibition, which is held from April 25 to May 25. The only problem is, the sky is the limit. This leaves many of my fellow peers at a loss for what they should make. When anything and everything is an option, it becomes difficult to narrow down the ideas. In my experience, the process is about learning what you like to do and having the courage to actually do it. At some point you have to pick something and just go with it. For my studio art major senior thesis, I had a vision of an ethereal woman underwater in a flowing gown. In the beginning, it seemed ridiculous, but that made me love it even more. The completion of the idea seemed nearly impossible at the time, but I was driven to see my vision through. To push the idea even further, I was insistent that the image needed to be life-size or bigger. This meant that I had to find a printer capable of doing something on such a large scale. Charly gave me the advice that he always gives me. “Try it and see what happens.” It always happens to be the best advice. After about 20 minutes of contemplation following my meeting with Charly, I decided to dive in headfirst and make my project a reality. This was going to be my thesis, for better or worse. I didn’t know the weight of obstacles that were ahead, but I had hope and determination. Where do you begin in a project like this? I didn’t have an underwater camera, or an underwater camera case—let alone a camera that would have a high-enough resolution to print the final image in life-size. I had to find a model who was strong enough not to drown while being weighed down by a water-logged wedding dress and also find a cheap gown that fit her. After a few weeks of investigating, I had a camera, an underwater case, a body of water to take photos in, lifeguards to standby and a good idea of how I would be able to take the photos underwater. I didn’t have the funds to obtain a scuba tank, so I was left to take photos underwater the old fashioned way—by holding my breath. Sounds easy, right? The pool is about 6.5 feet deep, so it wasn’t that far down. However, women tend to have a higher percent of body fat than men. This means it’s more difficult for me to sink than the average human man to sink, and it actually takes a lot

of effort to stay on the bottom of the pool. While that might not sound like that big of an obstacle, the timing was one of the hardest parts. My model, senior Rachel Geiter had to go underwater and hold her breath while holding poses for me. She had water going up her nose while sinking down and remaining very still. I had to make sure I took the shot at the right moment before we were both out of breath. You might think to yourself, “I wonder if a really long snorkel would work.” I tried. It didn’t. Obstacles aside, why I made this image is more than its aesthetic qualities. It struck a chord in me. This image was made to express the struggles I had with ideas of beauty and femininity. About a year ago, I started taking portraits, and I quickly fell in love with it. Specifically, I enjoyed capturing the female form in beautiful ways. But as I came to realize, I was using the same conventions of beauty that have harmed so many people. Although I was not intending to perpetuate these oppressive standards, it had become a part of my visual vocabulary. I had been programmed to see that skinny people are beautiful and cellulite was not. It seemed inescapable: how would I undo 21 years of seeing? I realized I was part of the problem, not the solution. “Blue” helped me address the struggles I had with the topics of beauty and femininity. The image was carefully curated and took months of planning and editing. This process further fed into the meaning of “Blue.” All of the photoshopping, stitching of photos together and coloring individual pixels one at a time speaks to how manipulated media’s projected ideas of beauty can be. In many ways, beauty has become something that is so processed, it is no longer in its raw state. But the scope of the project goes further than the ideas of beauty and femininity. Everyone deals with the oppression of stereotypes. The image speaks to the suffocation and constriction of needing to be something you aren’t. Completing “Blue” wasn’t just about a senior thesis project or creating something to display on a wall so I could graduate. It was about the process of learning how to get from the beginning to the end, and appreciating all the steps in between. In doing so, I identified struggles that I have been facing, and did more problem solving than I ever thought I was capable of. I learned to dream bigger dreams. So often, I realize I am not living intentionally, that I’m just floating with the current. Sometimes I feel like I have been living in the mindset of “what if” without giving my ideas a chance at fruition. But ideas are magical to me, like a seed that can be nurtured into something beautiful. I tried doing something I thought was impossible and succeeded. Something incredible happens when you realize that you can dream bigger dreams. So why not try it and see what happens? TheCircuit | 33 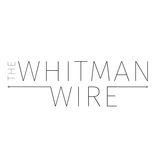