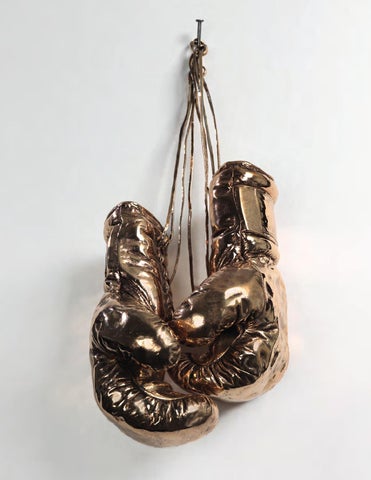 All Works are for Sale

For over half a century now, Clive Barker has cast or fabricated sculptures in bronze and other metals largely from found objects and finished them impeccably in a variety of surfaces, sometimes polished or plated in gold or silver so that they gleam like luxury commodities, sometimes painted or given a more traditionally artistic patina. Dispensing with the conventional tools of the sculptor and considering even a studio to be superfluous, he has instead concentrated his attention on choosing the objects that he takes to the foundry for casting – often with minimal apparent alteration – and on presiding over the process with absolute attention to detail but with scant need for his personal manual intervention. The conceptual rigour of his procedure, based on his observations as a very young man of the assembly-line methods employed in a car factory at which he was working, has paradoxically gone hand-in-hand with an intense subjectivity in his selection and an insistence on the sensuous physicality of the objects that are the endproduct of a step-by-step process born of a kind of daydream. Given the wide-ranging nature of his imagery, it is impressive to witness how this hands-off approach results repeatedly in sculptures that not only look confident and inevitable but that consistently bear the stamp of his artistic vision. Where one of his American Pop colleagues, Claes Oldenburg, reinvented sculpture in the early 1960s by taking ‘hard’ manufactured objects from the contemporary environment and rendering them as ‘soft’ forms sewn from canvas, Barker has often turned forms that are pliable or tender to the touch – as in the case of new works replicating boxing gloves or bunches of asparagus – into inflexible metal objects that convey an indisputable sense of their permanence. In works of the past several years displayed here, Barker addresses fragility (an origami boat), transience (fresh seasonal produce with a short shelf-life), built-in obsolescence (objects, such as a leather bag, showing signs of wear) and even death (butchered pigs’ heads), while rendering them all virtually indestructible and thus immortal. The result is doubleedged, since in presenting to our attention artefacts that we understand will long outlive us, each also acts as a memento mori, a reminder of the inevitability of our limited time on earth. That the precariousness of life should be a pressing subject for an artist now in his early seventies is not surprising, however optimistic the tone of Barker’s art in general. In Canary and Lamp Barker recalls the now discontinued practice of taking such birds into the mines as a way of warning the workers of the presence of carbon monoxide and other noxious gases. Trained as a painter, Barker has long made allusion to the materials and practice of art and to favourite artists and works from art history. These have taken the form of direct quotations, of glancing references and of images conforming to generic motifs: so there have been homages to Magritte, Van Gogh and Soutine, and to friends and contemporaries including Bacon and Hockney; revisions of the Venus de Milo; objects in the form of painting boxes and palettes, and sculptures shaped as schematized musical instruments that summon echoes of Cubism. All these approaches remain in evidence in the new works, enabling Barker to range widely in imagery while remaining consistent in his celebration of the emotive associative powers of art. A gleaming, gold-plated easel converts a necessary accoutrement of a traditional painter’s studio into a contraption that no longer has a practical function but that is now, particularly identified as Lucian Freud’s Easel, an object of veneration. The two sculptures of asparagus take their place within the history of still-life painting stretching back at least as far as Chardin, but with particular reference to an exquisite little canvas of 1880 by Manet in the Wallraf-Richartz Museum. Crown

of Thorns, a rare excursion into Christian imagery, reconfigures one of the most distressing episodes, that of the Mocking of Christ, as a highly desirable piece of luxurious jewellery in a purpose-made velvet-clad case, pointedly focussing the viewer’s thoughts on the fetishizing of pain and martyrdom in the Catholic tradition of relics of the saints. On a much lighter note, The Mad Hatter’s Hat takes us into the world of Lewis Carroll’s Alice adventures and particularly back to the celebrated illustrations of John Tenniel and more recently to those of Barker’s friend Peter Blake. Perhaps the most sober of the new works, Napoleon’s Hat at Waterloo, conjures the personality and missing face and body of the celebrated historical figure for whom it acts as surrogate. Like the bowler belonging to the mad hatter or the boxing gloves presented in isolation, but still seemingly inhabited by powerful male hands, this solitary painted bronze reminds us powerfully of an implicit human presence and of the particular human mind in which all these works originated. The illusionism at work here is taken one step further in Overnight Bag, a tour-de-force of trompe’l-oeil techniques in the meticulous casting of a leather bag, complete with brass-hued metal fastenings and a textured surface made all the more convincing by the application of a black patina. Unlike the original case from which it was cloned, this bag will never open and will not be able to carry any possessions. As a work of art, it no longer has a practical function. It does, however, conceptually remain a powerful container, a literally and metaphorically weighty receptacle for thought, emotion and reflection. Like so many of Barker’s sculptures, it presents itself in the guise of an ordinary thing that we might not even notice, but that once spotted becomes the intense focus of one’s attention. It is transformed into an object of contemplation that slowly yields its mysterious secrets in direct proportion to one’s own readiness to be seduced, mesmerized and carried to another world, the world of the imagination. Marco Livingstone, 2013

1957-59 Trained as a painter at Luton College of Technology and Art. Developed a particular interest in the painting of Cézanne, Picasso, Soutine and Van Gogh, which would later be expressed in his sculpture. An unsympathetic sculpture teacher discouraged his interest in the subject. 1960-61 Worked on the assembly line at Vauxhall Motors, Luton, for a period of fifteen months. Working with chrome plated and leather upholstered car parts would later prove to be a formative experience. Imagined making art as consumer goods, the product of co-ordinated cooperation between specialist craftsmen. 1961

Moved to London. Started concentrating on making objects. Using corrugated cardboard, fabricated a series of five targets, realising his own versions of this Pop Art icon. First use of neon. First use of the zip image in Three Zips, silkscreen on canvas. Included in ‘Young Contemporaries’, RBA Galleries, London.

First casts in bronze and aluminium. Two Palettes for Jim Dine, a homage to the American whose paintings Barker had seen at the Robert Fraser Gallery, marked the beginning of the use of chrome plating. Included in ‘118 Show’, Kasmin Gallery, London.

Tutor at Maidstone School of Art.

One-man show at the Robert Fraser Gallery. Included in ‘Works from 1956 to 1967 by Clive

One-man show at the Hanover Gallery. Included in ‘Pop Art’, Hayward Gallery, London, and in ‘Young and Fantastic’, ICA, London. Cast the life mask of his friend Francis Bacon

The Tate Gallery, London, purchased Splash (1967). Included in ‘British Sculpture out of the Sixties’, ICA, London,

Included in a group shows at Baukunst-Galerie, Cologne.

Included in ‘British Artists of the 60’s’, Tate Gallery, London.

Made a group of portrait heads of friends, including Eduardo Paolozzi and Marianne Faithfull. Included in ‘British Sculpture in the 20th Century’, Whitechapel Art Gallery, London.

Commenced a group of still-lifes presented on cast iron tables. With Gold Coke returned to the theme of the Coke bottle.

The City of Luton commissioned Elephant for Luton. Included in ‘The Sixties Art Scene in London’, Barbican Art Gallery, London.

Returned to the subject matter of Cubism with two Cubist still-lifes.

The Berardo Foundation acquired Homage to Soutine (1969) for the Sintra Museum of Modern Art, Lisbon.

With The Last Coke Bottle, Barker drew a line under this seminal subject of his visual vocabulary. One-man show at Whitford Fine Art, London.

One-man show at Whitford Fine Art, London to coincide with the publication of a catalogue raisonné.

Present iconography contemplates and investigates the outcome of mass-consumerism of the heyday of Pop. One-man show at Whitford Fine Art, London.

For over half a century now, Clive Barker has cast or fabricated sculptures in bronze and other metals largely from found objects and finished them impeccably in a variety of surfaces, sometimes polished or plated in gold or silver so that they gleam like luxury commodities, sometimes painted or given a more traditionally artistic patina. Dispensing with the conventional tools of the sculptor and considering even a studio to be superfluous, he has instead concentrated his attention on choosing the objects that he takes to the foundry for casting - often with minimal apparent alteration - and on presiding over the process with absolute attention to detail but with scant need for his personal manual intervention.