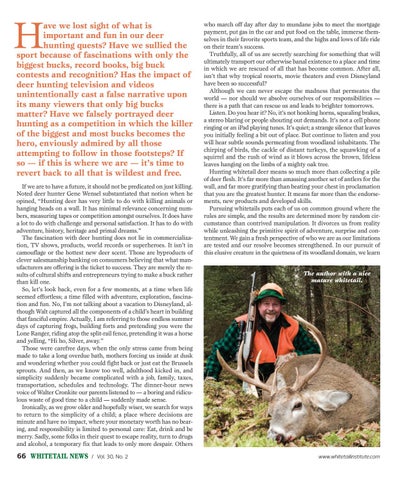 ave we lost sight of what is important and fun in our deer hunting quests? Have we sullied the sport because of fascinations with only the biggest bucks, record books, big buck contests and recognition? Has the impact of deer hunting television and videos unintentionally cast a false narrative upon its many viewers that only big bucks matter? Have we falsely portrayed deer hunting as a competition in which the killer of the biggest and most bucks becomes the hero, enviously admired by all those attempting to follow in those footsteps? If so — if this is where we are — it’s time to revert back to all that is wildest and free. If we are to have a future, it should not be predicated on just killing. Noted deer hunter Gene Wensel substantiated that notion when he opined, “Hunting deer has very little to do with killing animals or hanging heads on a wall. It has minimal relevance concerning numbers, measuring tapes or competition amongst ourselves. It does have a lot to do with challenge and personal satisfaction. It has to do with adventure, history, heritage and primal dreams.” The fascination with deer hunting does not lie in commercialization, TV shows, products, world records or superheroes. It isn’t in camouflage or the hottest new deer scent. Those are byproducts of clever salesmanship banking on consumers believing that what manufacturers are offering is the ticket to success. They are merely the results of cultural shifts and entrepreneurs trying to make a buck rather than kill one. So, let’s look back, even for a few moments, at a time when life seemed effortless; a time filled with adventure, exploration, fascination and fun. No, I’m not talking about a vacation to Disneyland, although Walt captured all the components of a child’s heart in building that fanciful empire. Actually, I am referring to those endless summer days of capturing frogs, building forts and pretending you were the Lone Ranger, riding atop the split-rail fence, pretending it was a horse and yelling, “Hi ho, Silver, away.” Those were carefree days, when the only stress came from being made to take a long overdue bath, mothers forcing us inside at dusk and wondering whether you could fight back or just eat the Brussels sprouts. And then, as we know too well, adulthood kicked in, and simplicity suddenly became complicated with a job, family, taxes, transportation, schedules and technology. The dinner-hour news voice of Walter Cronkite our parents listened to — a boring and ridiculous waste of good time to a child — suddenly made sense. Ironically, as we grow older and hopefully wiser, we search for ways to return to the simplicity of a child; a place where decisions are minute and have no impact, where your monetary worth has no bearing, and responsibility is limited to personal care: Eat, drink and be merry. Sadly, some folks in their quest to escape reality, turn to drugs and alcohol, a temporary fix that leads to only more despair. Others

who march off day after day to mundane jobs to meet the mortgage payment, put gas in the car and put food on the table, immerse themselves in their favorite sports team, and the highs and lows of life ride on their team’s success. Truthfully, all of us are secretly searching for something that will ultimately transport our otherwise banal existence to a place and time in which we are rescued of all that has become common. After all, isn’t that why tropical resorts, movie theaters and even Disneyland have been so successful? Although we can never escape the madness that permeates the world — nor should we absolve ourselves of our responsibilities — there is a path that can rescue us and leads to brighter tomorrows. Listen. Do you hear it? No, it’s not honking horns, squealing brakes, a stereo blaring or people shouting out demands. It’s not a cell phone ringing or an iPad playing tunes. It’s quiet; a strange silence that leaves you initially feeling a bit out of place. But continue to listen and you will hear subtle sounds permeating from woodland inhabitants. The chirping of birds, the cackle of distant turkeys, the squawking of a squirrel and the rush of wind as it blows across the brown, lifeless leaves hanging on the limbs of a mighty oak tree. Hunting whitetail deer means so much more than collecting a pile of deer flesh. It’s far more than amassing another set of antlers for the wall, and far more gratifying than beating your chest in proclamation that you are the greatest hunter. It means far more than the endorsements, new products and developed skills. Pursuing whitetails puts each of us on common ground where the rules are simple, and the results are determined more by random circumstance than contrived manipulation. It divorces us from reality while unleashing the primitive spirit of adventure, surprise and contentment. We gain a fresh perspective of who we are as our limitations are tested and our resolve becomes strengthened. In our pursuit of this elusive creature in the quietness of its woodland domain, we learn The author with a nice mature whitetail.