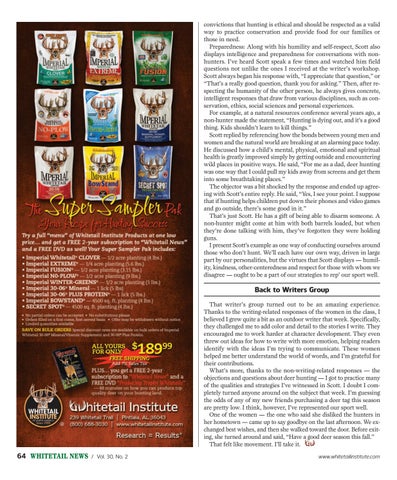 convictions that hunting is ethical and should be respected as a valid way to practice conservation and provide food for our families or those in need. Preparedness: Along with his humility and self-respect, Scott also displays intelligence and preparedness for conversations with nonhunters. I’ve heard Scott speak a few times and watched him field questions not unlike the ones I received at the writer’s workshop. Scott always began his response with, “I appreciate that question,” or “That’s a really good question, thank you for asking.” Then, after respecting the humanity of the other person, he always gives concrete, intelligent responses that draw from various disciplines, such as conservation, ethics, social sciences and personal experiences. For example, at a natural resources conference several years ago, a non-hunter made the statement, “Hunting is dying out, and it’s a good thing. Kids shouldn’t learn to kill things.” Scott replied by referencing how the bonds between young men and women and the natural world are breaking at an alarming pace today. He discussed how a child’s mental, physical, emotional and spiritual health is greatly improved simply by getting outside and encountering wild places in positive ways. He said, “For me as a dad, deer hunting was one way that I could pull my kids away from screens and get them into some breathtaking places.” The objector was a bit shocked by the response and ended up agreeing with Scott’s entire reply. He said, “Yes, I see your point. I suppose that if hunting helps children put down their phones and video games and go outside, there’s some good in it.” That’s just Scott. He has a gift of being able to disarm someone. A non-hunter might come at him with both barrels loaded, but when they’re done talking with him, they’ve forgotten they were holding guns. I present Scott’s example as one way of conducting ourselves around those who don’t hunt. We’ll each have our own way, driven in large part by our personalities, but the virtues that Scott displays — humility, kindness, other-centeredness and respect for those with whom we disagree — ought to be a part of our strategies to rep’ our sport well.

Back to Writers Group That writer’s group turned out to be an amazing experience. Thanks to the writing-related responses of the women in the class, I believed I grew quite a bit as an outdoor writer that week. Specifically, they challenged me to add color and detail to the stories I write. They encouraged me to work harder at character development. They even threw out ideas for how to write with more emotion, helping readers identify with the ideas I’m trying to communicate. These women helped me better understand the world of words, and I’m grateful for their contributions. What’s more, thanks to the non-writing-related responses — the objections and questions about deer hunting — I got to practice many of the qualities and strategies I’ve witnessed in Scott. I doubt I completely turned anyone around on the subject that week. I’m guessing the odds of any of my new friends purchasing a deer tag this season are pretty low. I think, however, I’ve represented our sport well. One of the women — the one who said she disliked the hunters in her hometown — came up to say goodbye on the last afternoon. We exchanged best wishes, and then she walked toward the door. Before exiting, she turned around and said, “Have a good deer season this fall.” That felt like movement. I’ll take it. ^