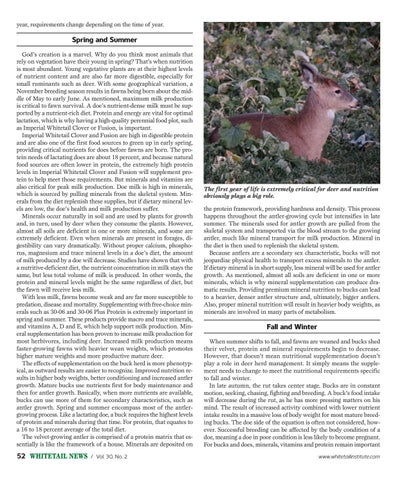 year, requirements change depending on the time of year.

Spring and Summer God’s creation is a marvel. Why do you think most animals that rely on vegetation have their young in spring? That’s when nutrition is most abundant. Young vegetative plants are at their highest levels of nutrient content and are also far more digestible, especially for small ruminants such as deer. With some geographical variation, a November breeding season results in fawns being born about the middle of May to early June. As mentioned, maximum milk production is critical to fawn survival. A doe’s nutrient-dense milk must be supported by a nutrient-rich diet. Protein and energy are vital for optimal lactation, which is why having a high-quality perennial food plot, such as Imperial Whitetail Clover or Fusion, is important. Imperial Whitetail Clover and Fusion are high in digestible protein and are also one of the first food sources to green up in early spring, providing critical nutrients for does before fawns are born. The protein needs of lactating does are about 18 percent, and because natural food sources are often lower in protein, the extremely high protein levels in Imperial Whitetail Clover and Fusion will supplement protein to help meet those requirements. But minerals and vitamins are also critical for peak milk production. Doe milk is high in minerals, which is sourced by pulling minerals from the skeletal system. Minerals from the diet replenish these supplies, but if dietary mineral levels are low, the doe’s health and milk production suffer. Minerals occur naturally in soil and are used by plants for growth and, in turn, used by deer when they consume the plants. However, almost all soils are deficient in one or more minerals, and some are extremely deficient. Even when minerals are present in forages, digestibility can vary dramatically. Without proper calcium, phosphorus, magnesium and trace mineral levels in a doe’s diet, the amount of milk produced by a doe will decrease. Studies have shown that with a nutritive-deficient diet, the nutrient concentration in milk stays the same, but less total volume of milk is produced. In other words, the protein and mineral levels might be the same regardless of diet, but the fawn will receive less milk. With less milk, fawns become weak and are far more susceptible to predation, disease and mortality. Supplementing with free-choice minerals such as 30-06 and 30-06 Plus Protein is extremely important in spring and summer. These products provide macro and trace minerals, and vitamins A, D and E, which help support milk production. Mineral supplementation has been proven to increase milk production for most herbivores, including deer. Increased milk production means faster-growing fawns with heavier wean weights, which promotes higher mature weights and more productive mature deer. The effects of supplementation on the buck herd is more phenotypical, as outward results are easier to recognize. Improved nutrition results in higher body weights, better conditioning and increased antler growth. Mature bucks use nutrients first for body maintenance and then for antler growth. Basically, when more nutrients are available, bucks can use more of them for secondary characteristics, such as antler growth. Spring and summer encompass most of the antlergrowing process. Like a lactating doe, a buck requires the highest levels of protein and minerals during that time. For protein, that equates to a 16 to 18 percent average of the total diet. The velvet-growing antler is comprised of a protein matrix that essentially is like the framework of a house. Minerals are deposited on

The first year of life is extremely critical for deer and nutrition obviously plays a big role. the protein framework, providing hardness and density. This process happens throughout the antler-growing cycle but intensifies in late summer. The minerals used for antler growth are pulled from the skeletal system and transported via the blood stream to the growing antler, much like mineral transport for milk production. Mineral in the diet is then used to replenish the skeletal system. Because antlers are a secondary sex characteristic, bucks will not jeopardize physical health to transport excess minerals to the antler. If dietary mineral is in short supply, less mineral will be used for antler growth. As mentioned, almost all soils are deficient in one or more minerals, which is why mineral supplementation can produce dramatic results. Providing premium mineral nutrition to bucks can lead to a heavier, denser antler structure and, ultimately, bigger antlers. Also, proper mineral nutrition will result in heavier body weights, as minerals are involved in many parts of metabolism.

Fall and Winter When summer shifts to fall, and fawns are weaned and bucks shed their velvet, protein and mineral requirements begin to decrease. However, that doesn’t mean nutritional supplementation doesn’t play a role in deer herd management. It simply means the supplement needs to change to meet the nutritional requirements specific to fall and winter. In late autumn, the rut takes center stage. Bucks are in constant motion, seeking, chasing, fighting and breeding. A buck’s food intake will decrease during the rut, as he has more pressing matters on his mind. The result of increased activity combined with lower nutrient intake results in a massive loss of body weight for most mature breeding bucks. The doe side of the equation is often not considered, however. Successful breeding can be affected by the body condition of a doe, meaning a doe in poor condition is less likely to become pregnant. For bucks and does, minerals, vitamins and protein remain important www.whitetailinstitute.com