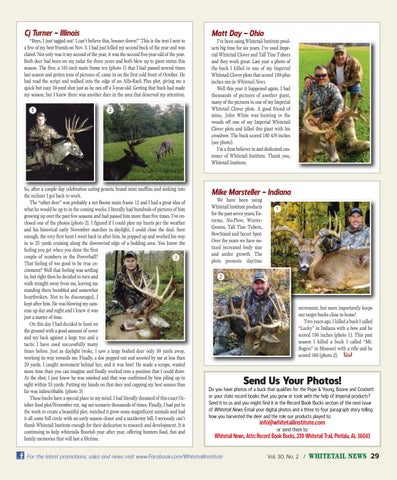 “Boys, I just tagged out! I can’t believe this, booner down!” This is the text I sent to a few of my best friends on Nov. 3. I had just killed my second buck of the year and was elated. Not only was it my second of the year, it was the second five-year-old of the year. Both deer had been on my radar for three years and both blew up to giant status this season. The first, a 161-inch main frame ten (photo 1) that I had passed several times last season and gotten tons of pictures of, came in on the first cold front of October. He had read the script and walked into the edge of an Alfa-Rack Plus plot, giving me a quick but easy 10-yard shot just as he ran off a 3-year-old. Getting that buck had made my season, but I knew there was another deer in the area that deserved my attention.

So, after a couple day celebration eating generic brand mini muffins and sinking into the recliner I got back to work. The “other deer” was probably a net Boone main frame 12 and I had a great idea of what he would be up to in the coming weeks. I literally had hundreds of pictures of him growing up over the past few seasons and had passed him more than five times. I’ve enclosed one of the photos (photo 2). I figured if I could plan my hunts per the weather and his historical early November marches in daylight, I could close the deal. Sure enough, the very first hunt I went back in after him, he popped up and worked his way in to 25 yards cruising along the downwind edge of a bedding area. You know the feeling you get when you draw the first couple of numbers in the Powerball?  That feeling of too good to be true excitement? Well that feeling was settling in, but right then he decided to turn and walk straight away from me, leaving me standing there humbled and somewhat heartbroken. Not to be discouraged, I kept after him. He was blowing my cameras up day and night and I knew it was just a matter of time. On this day I had decided to hunt on the ground with a good amount of cover and my back against a large tree and a tactic I have used successfully many times before. Just as daylight broke, I saw a large bodied deer only 50 yards away, working its way towards me. Finally, a doe popped out and scooted by me at less than 20 yards. I caught movement behind her, and it was him! He made a scrape, wasted more time than you can imagine and finally worked into a position that I could draw. At the shot, I just knew he was smoked and that was confirmed by him piling up in sight within 35 yards. Putting my hands on that deer and capping my best season thus far was indescribable. (photo 3) These bucks have a special place in my mind. I had literally dreamed of this exact October food plot/November rut, tag out scenario thousands of times. Finally, I had put in the work to create a beautiful plot, watched it grow some magnificent animals and had it all come full circle with an early season closer and a taxidermy bill. I seriously can’t thank Whitetail Institute enough for their dedication to research and development. It is continuing to help whitetails flourish year after year, offering hunters food, fun and family memories that will last a lifetime.

Mike Marsteller – Indiana We have been using Whitetail Institute products for the past seven years; Extreme, No-Plow, WinterGreens, Tall Tine Tubers, BowStand and Secret Spot. Over the years we have noticed increased body size and antler growth. The plots promote daytime

Send Us Your Photos!

Do you have photos of a buck that qualifies for the Pope & Young, Boone and Crockett or your state record books that you grew or took with the help of Imperial products? Send it to us and you might find it in the Record Book Bucks section of the next issue of Whitetail News. Email your digital photos and a three to four paragraph story telling how you harvested the deer and the role our products played to:

info@whitetailinstitute.com or send them to: