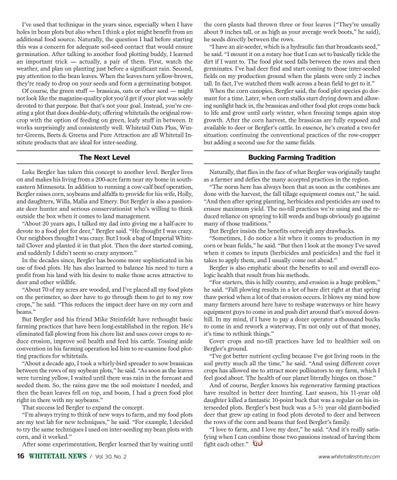 I’ve used that technique in the years since, especially when I have holes in bean plots but also when I think a plot might benefit from an additional food source. Naturally, the question I had before starting this was a concern for adequate soil-seed contact that would ensure germination. After talking to another food plotting buddy, I learned an important trick — actually, a pair of them. First, watch the weather, and plan on planting just before a significant rain. Second, pay attention to the bean leaves. When the leaves turn yellow-brown, they’re ready to drop on your seeds and form a germinating hotspot. Of course, the green stuff — brassicas, oats or other seed — might not look like the magazine-quality plot you’d get if your plot was solely devoted to that purpose. But that’s not your goal. Instead, you’re creating a plot that does double-duty, offering whitetails the original rowcrop with the option of feeding on green, leafy stuff in between. It works surprisingly and consistently well. Whitetail Oats Plus, Winter-Greens, Beets & Greens and Pure Attraction are all Whitetail Institute products that are ideal for inter-seeding.

the corn plants had thrown three or four leaves (“They’re usually about 9 inches tall, or as high as your average work boots,” he said), he seeds directly between the rows. “I have an air-seeder, which is a hydraulic fan that broadcasts seed,” he said. “I mount it on a rotary hoe that I can set to basically tickle the dirt if I want to. The food plot seed falls between the rows and then germinates. I’ve had deer find and start coming to those inter-seeded fields on my production ground when the plants were only 2 inches tall. In fact, I’ve watched them walk across a bean field to get to it.” When the corn canopies, Bergler said, the food plot species go dormant for a time. Later, when corn stalks start drying down and allowing sunlight back in, the brassicas and other food plot crops come back to life and grow until early winter, when freezing temps again stop growth. After the corn harvest, the brassicas are fully exposed and available to deer or Bergler’s cattle. In essence, he’s created a two-fer situation: continuing the conventional practices of the row-cropper but adding a second use for the same fields.

Luke Bergler has taken this concept to another level. Bergler lives on and makes his living from a 200-acre farm near my home in southeastern Minnesota. In addition to running a cow-calf beef operation, Bergler raises corn, soybeans and alfalfa to provide for his wife, Holly, and daughters, Willa, Malia and Emery. But Bergler is also a passionate deer hunter and serious conservationist who’s willing to think outside the box when it comes to land management. “About 20 years ago, I talked my dad into giving me a half-acre to devote to a food plot for deer,” Bergler said. “He thought I was crazy. Our neighbors thought I was crazy. But I took a bag of Imperial Whitetail Clover and planted it in that plot. Then the deer started coming, and suddenly I didn’t seem so crazy anymore.” In the decades since, Bergler has become more sophisticated in his use of food plots. He has also learned to balance his need to turn a profit from his land with his desire to make those acres attractive to deer and other wildlife. “About 70 of my acres are wooded, and I’ve placed all my food plots on the perimeter, so deer have to go through them to get to my row crops,” he said. “This reduces the impact deer have on my corn and beans.” But Bergler and his friend Mike Steinfeldt have rethought basic farming practices that have been long-established in the region. He’s eliminated fall plowing from his chore list and uses cover crops to reduce erosion, improve soil health and feed his cattle. Tossing aside convention in his farming operation led him to re-examine food plotting practices for whitetails. “About a decade ago, I took a whirly-bird spreader to sow brassicas between the rows of my soybean plots,” he said. “As soon as the leaves were turning yellow, I waited until there was rain in the forecast and seeded them. So, the rains gave me the soil moisture I needed, and then the bean leaves fell on top, and boom, I had a green food plot right in there with my soybeans.” That success led Bergler to expand the concept. “I’m always trying to think of new ways to farm, and my food plots are my test lab for new techniques,” he said. “For example, I decided to try the same techniques I used on inter-seeding my bean plots with corn, and it worked.” After some experimentation, Bergler learned that by waiting until

Naturally, that flies in the face of what Bergler was originally taught as a farmer and defies the many accepted practices in the region. “The norm here has always been that as soon as the combines are done with the harvest, the fall tillage equipment comes out,” he said. “And then after spring planting, herbicides and pesticides are used to ensure maximum yield. The no-till practices we’re using and the reduced reliance on spraying to kill weeds and bugs obviously go against many of those traditions.” But Bergler insists the benefits outweigh any drawbacks. “Sometimes, I do notice a hit when it comes to production in my corn or bean fields,” he said. “But then I look at the money I’ve saved when it comes to inputs (herbicides and pesticides) and the fuel it takes to apply them, and I usually come out ahead.” Bergler is also emphatic about the benefits to soil and overall ecologic health that result from his methods. “For starters, this is hilly country, and erosion is a huge problem,” he said. “Fall plowing results in a lot of bare dirt right at that spring thaw period when a lot of that erosion occurs. It blows my mind how many farmers around here have to reshape waterways or hire heavy equipment guys to come in and push dirt around that’s moved downhill. In my mind, if I have to pay a dozer operator a thousand bucks to come in and rework a waterway, I’m not only out of that money, it’s time to rethink things.” Cover crops and no-till practices have led to healthier soil on Bergler’s ground. “I’ve got better nutrient cycling because I’ve got living roots in the soil pretty much all the time,” he said. “And using different cover crops has allowed me to attract more pollinators to my farm, which I feel good about. The health of our planet literally hinges on those.” And of course, Bergler knows his regenerative farming practices have resulted in better deer hunting. Last season, his 11-year old daughter killed a fantastic 10-point buck that was a regular on his interseeded plots. Bergler’s best buck was a 5-½ year old giant-bodied deer that grew up eating in food plots devoted to deer and between the rows of the corn and beans that feed Bergler’s family. “I love to farm, and I love my deer,” he said. “And it’s really satisfying when I can combine those two passions instead of having them fight each other.” ^