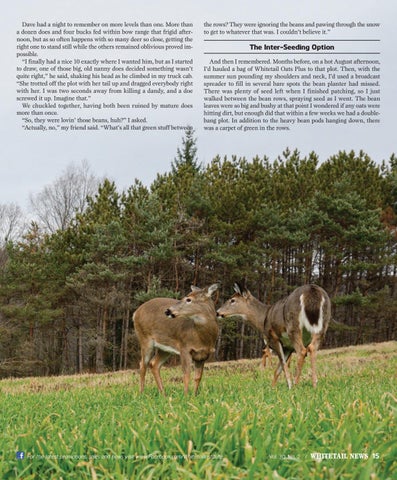 Dave had a night to remember on more levels than one. More than a dozen does and four bucks fed within bow range that frigid afternoon, but as so often happens with so many deer so close, getting the right one to stand still while the others remained oblivious proved impossible. “I finally had a nice 10 exactly where I wanted him, but as I started to draw, one of those big, old nanny does decided something wasn’t quite right,” he said, shaking his head as he climbed in my truck cab. “She trotted off the plot with her tail up and dragged everybody right with her. I was two seconds away from killing a dandy, and a doe screwed it up. Imagine that.” We chuckled together, having both been ruined by mature does more than once. “So, they were lovin’ those beans, huh?” I asked. “Actually, no,” my friend said. “What’s all that green stuff between

the rows? They were ignoring the beans and pawing through the snow to get to whatever that was. I couldn’t believe it.”

The Inter-Seeding Option And then I remembered. Months before, on a hot August afternoon, I’d hauled a bag of Whitetail Oats Plus to that plot. Then, with the summer sun pounding my shoulders and neck, I’d used a broadcast spreader to fill in several bare spots the bean planter had missed. There was plenty of seed left when I finished patching, so I just walked between the bean rows, spraying seed as I went. The bean leaves were so big and bushy at that point I wondered if any oats were hitting dirt, but enough did that within a few weeks we had a doublebang plot. In addition to the heavy bean pods hanging down, there was a carpet of green in the rows.