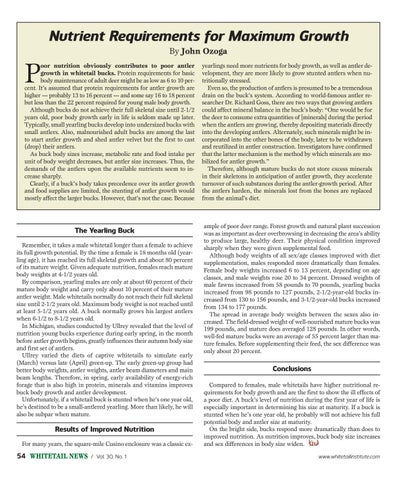 oor nutrition obviously contributes to poor antler growth in whitetail bucks. Protein requirements for basic body maintenance of adult deer might be as low as 6 to 10 percent. It’s assumed that protein requirements for antler growth are higher — probably 13 to 16 percent — and some say 16 to 18 percent but less than the 22 percent required for young male body growth. Although bucks do not achieve their full skeletal size until 2-1/2 years old, poor body growth early in life is seldom made up later. Typically, small yearling bucks develop into undersized bucks with small antlers. Also, malnourished adult bucks are among the last to start antler growth and shed antler velvet but the first to cast (drop) their antlers. As buck body sizes increase, metabolic rate and food intake per unit of body weight decreases, but antler size increases. Thus, the demands of the antlers upon the available nutrients seem to increase sharply. Clearly, if a buck’s body takes precedence over its antler growth and food supplies are limited, the stunting of antler growth would mostly affect the larger bucks. However, that’s not the case. Because

The Yearling Buck Remember, it takes a male whitetail longer than a female to achieve its full growth potential. By the time a female is 18 months old (yearling age), it has reached its full skeletal growth and about 80 percent of its mature weight. Given adequate nutrition, females reach mature body weights at 4-1/2 years old. By comparison, yearling males are only at about 60 percent of their mature body weight and carry only about 10 percent of their mature antler weight. Male whitetails normally do not reach their full skeletal size until 2-1/2 years old. Maximum body weight is not reached until at least 5-1/2 years old. A buck normally grows his largest antlers when 6-1/2 to 8-1/2 years old. In Michigan, studies conducted by Ullrey revealed that the level of nutrition young bucks experience during early spring, in the month before antler growth begins, greatly influences their autumn body size and first set of antlers. Ullrey varied the diets of captive whitetails to simulate early (March) versus late (April) green-up. The early green-up group had better body weights, antler weights, antler beam diameters and main beam lengths. Therefore, in spring, early availability of energy-rich forage that is also high in protein, minerals and vitamins improves buck body growth and antler development. Unfortunately, if a whitetail buck is stunted when he’s one year old, he’s destined to be a small-antlered yearling. More than likely, he will also be subpar when mature.

Results of Improved Nutrition For many years, the square-mile Cusino enclosure was a classic ex-

yearlings need more nutrients for body growth, as well as antler development, they are more likely to grow stunted antlers when nutritionally stressed. Even so, the production of antlers is presumed to be a tremendous drain on the buck’s system. According to world-famous antler researcher Dr. Richard Goss, there are two ways that growing antlers could affect mineral balance in the buck’s body: “One would be for the deer to consume extra quantities of [minerals] during the period when the antlers are growing, thereby depositing materials directly into the developing antlers. Alternately, such minerals might be incorporated into the other bones of the body, later to be withdrawn and reutilized in antler construction. Investigators have confirmed that the latter mechanism is the method by which minerals are mobilized for antler growth.” Therefore, although mature bucks do not store excess minerals in their skeletons in anticipation of antler growth, they accelerate turnover of such substances during the antler-growth period. After the antlers harden, the minerals lost from the bones are replaced from the animal’s diet.

ample of poor deer range. Forest growth and natural plant succession was as important as deer overbrowsing in decreasing the area’s ability to produce large, healthy deer. Their physical condition improved sharply when they were given supplemental feed. Although body weights of all sex/age classes improved with diet supplementation, males responded more dramatically than females. Female body weights increased 6 to 13 percent, depending on age classes, and male weights rose 20 to 34 percent. Dressed weights of male fawns increased from 58 pounds to 70 pounds, yearling bucks increased from 98 pounds to 127 pounds, 2-1/2-year-old bucks increased from 130 to 156 pounds, and 3-1/2-year-old bucks increased from 134 to 177 pounds. The spread in average body weights between the sexes also increased. The field-dressed weight of well-nourished mature bucks was 199 pounds, and mature does averaged 128 pounds. In other words, well-fed mature bucks were an average of 55 percent larger than mature females. Before supplementing their feed, the sex difference was only about 20 percent.

Conclusions Compared to females, male whitetails have higher nutritional requirements for body growth and are the first to show the ill effects of a poor diet. A buck’s level of nutrition during the first year of life is especially important in determining his size at maturity. If a buck is stunted when he’s one year old, he probably will not achieve his full potential body and antler size at maturity. On the bright side, bucks respond more dramatically than does to improved nutrition. As nutrition improves, buck body size increases and sex differences in body size widen. ^ www.whitetailinstitute.com