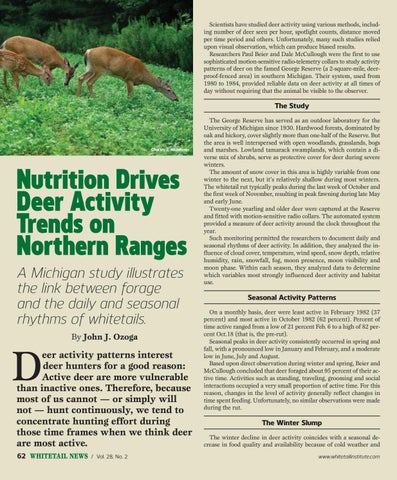 Scientists have studied deer activity using various methods, including number of deer seen per hour, spotlight counts, distance moved per time period and others. Unfortunately, many such studies relied upon visual observation, which can produce biased results. Researchers Paul Beier and Dale McCullough were the first to use sophisticated motion-sensitive radio-telemetry collars to study activity patterns of deer on the famed George Reserve (a 2-square-mile, deerproof-fenced area) in southern Michigan. Their system, used from 1980 to 1984, provided reliable data on deer activity at all times of day without requiring that the animal be visible to the observer.

Nutrition Drives Deer Activity Trends on Northern Ranges A Michigan study illustrates the link between forage and the daily and seasonal rhythms of whitetails. By John J. Ozoga

eer activity patterns interest deer hunters for a good reason: Active deer are more vulnerable than inactive ones. Therefore, because most of us cannot â&#x20AC;&#x201D; or simply will not â&#x20AC;&#x201D; hunt continuously, we tend to concentrate hunting effort during those time frames when we think deer are most active. 62 WHITETAIL NEWS

The George Reserve has served as an outdoor laboratory for the University of Michigan since 1930. Hardwood forests, dominated by oak and hickory, cover slightly more than one-half of the Reserve. But the area is well interspersed with open woodlands, grasslands, bogs and marshes. Lowland tamarack swamplands, which contain a diverse mix of shrubs, serve as protective cover for deer during severe winters. The amount of snow cover in this area is highly variable from one winter to the next, but itâ&#x20AC;&#x2122;s relatively shallow during most winters. The whitetail rut typically peaks during the last week of October and the first week of November, resulting in peak fawning during late May and early June. Twenty-one yearling and older deer were captured at the Reserve and fitted with motion-sensitive radio collars. The automated system provided a measure of deer activity around the clock throughout the year. Such monitoring permitted the researchers to document daily and seasonal rhythms of deer activity. In addition, they analyzed the influence of cloud cover, temperature, wind speed, snow depth, relative humidity, rain, snowfall, fog, moon presence, moon visibility and moon phase. Within each season, they analyzed data to determine which variables most strongly influenced deer activity and habitat use.

Seasonal Activity Patterns On a monthly basis, deer were least active in February 1982 (37 percent) and most active in October 1982 (62 percent). Percent of time active ranged from a low of 21 percent Feb. 6 to a high of 82 percent Oct.18 (that is, the pre-rut). Seasonal peaks in deer activity consistently occurred in spring and fall, with a pronounced low in January and February, and a moderate low in June, July and August. Based upon direct observation during winter and spring, Beier and McCullough concluded that deer foraged about 95 percent of their active time. Activities such as standing, traveling, grooming and social interactions occupied a very small proportion of active time. For this reason, changes in the level of activity generally reflect changes in time spent feeding. Unfortunately, no similar observations were made during the rut.

The Winter Slump The winter decline in deer activity coincides with a seasonal decrease in food quality and availability because of cold weather and www.whitetailinstitute.com