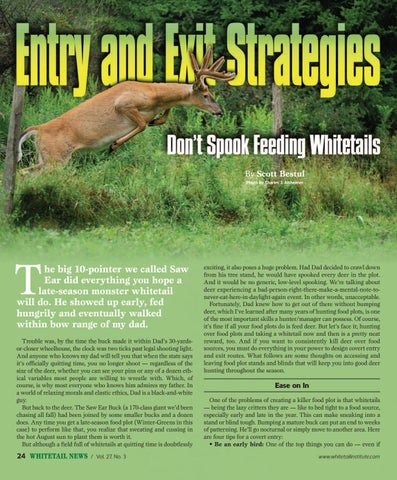 he big 10-pointer we called Saw Ear did everything you hope a late-season monster whitetail will do. He showed up early, fed hungrily and eventually walked within bow range of my dad. Trouble was, by the time the buck made it within Dad’s 30-yardsor-closer wheelhouse, the clock was two ticks past legal shooting light. And anyone who knows my dad will tell you that when the state says it’s officially quitting time, you no longer shoot — regardless of the size of the deer, whether you can see your pins or any of a dozen ethical variables most people are willing to wrestle with. Which, of course, is why most everyone who knows him admires my father. In a world of relaxing morals and elastic ethics, Dad is a black-and-white guy. But back to the deer. The Saw Ear Buck (a 170-class giant we’d been chasing all fall) had been joined by some smaller bucks and a dozen does. Any time you get a late-season food plot (Winter-Greens in this case) to perform like that, you realize that sweating and cussing in the hot August sun to plant them is worth it. But although a field full of whitetails at quitting time is doubtlessly

exciting, it also poses a huge problem. Had Dad decided to crawl down from his tree stand, he would have spooked every deer in the plot. And it would be no generic, low-level spooking. We’re talking about deer experiencing a bad-person-right-there-make-a-mental-note-tonever-eat-here-in-daylight-again event. In other words, unacceptable. Fortunately, Dad knew how to get out of there without bumping deer, which I’ve learned after many years of hunting food plots, is one of the most important skills a hunter/manager can possess. Of course, it’s fine if all your food plots do is feed deer. But let’s face it; hunting over food plots and taking a whitetail now and then is a pretty neat reward, too. And if you want to consistently kill deer over food sources, you must do everything in your power to design covert entry and exit routes. What follows are some thoughts on accessing and leaving food plot stands and blinds that will keep you into good deer hunting throughout the season.

Ease on In One of the problems of creating a killer food plot is that whitetails — being the lazy critters they are — like to bed tight to a food source, especially early and late in the year. This can make sneaking into a stand or blind tough. Bumping a mature buck can put an end to weeks of patterning. He’ll go nocturnal or simply move to another area. Here are four tips for a covert entry: • Be an early bird: One of the top things you can do — even if www.whitetailinstitute.com