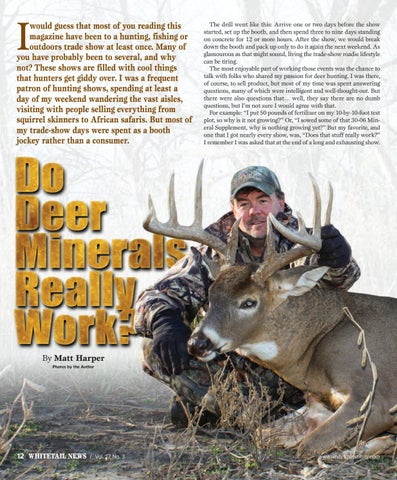 would guess that most of you reading this magazine have been to a hunting, fishing or outdoors trade show at least once. Many of you have probably been to several, and why not? These shows are filled with cool things that hunters get giddy over. I was a frequent patron of hunting shows, spending at least a day of my weekend wandering the vast aisles, visiting with people selling everything from squirrel skinners to African safaris. But most of my trade-show days were spent as a booth jockey rather than a consumer.

The drill went like this: Arrive one or two days before the show started, set up the booth, and then spend three to nine days standing on concrete for 12 or more hours. After the show, we would break down the booth and pack up only to do it again the next weekend. As glamourous as that might sound, living the trade-show roadie lifestyle can be tiring. The most enjoyable part of working those events was the chance to talk with folks who shared my passion for deer hunting. I was there, of course, to sell product, but most of my time was spent answering questions, many of which were intelligent and well-thought-out. But there were also questions that… well, they say there are no dumb questions, but I’m not sure I would agree with that. For example: “I put 50 pounds of fertilizer on my 10-by-10-foot test plot, so why is it not growing?” Or, “I sowed some of that 30-06 Mineral Supplement, why is nothing growing yet?” But my favorite, and one that I got nearly every show, was, “Does that stuff really work?” I remember I was asked that at the end of a long and exhausting show.

By Matt Harper Photos by the Author