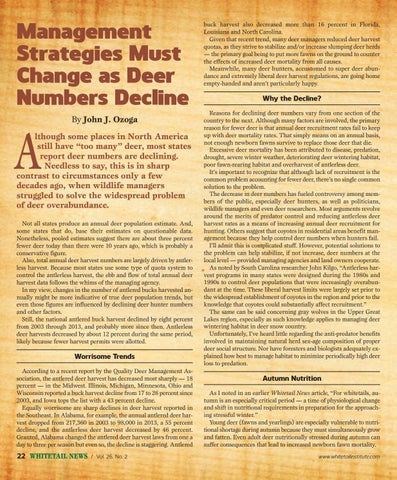 Management Strategies Must Change as Deer Numbers Decline By John J. Ozoga lthough some places in North America still have “too many” deer, most states report deer numbers are declining. Needless to say, this is in sharp contrast to circumstances only a few decades ago, when wildlife managers struggled to solve the widespread problem of deer overabundance. Not all states produce an annual deer population estimate. And, some states that do, base their estimates on questionable data. Nonetheless, pooled estimates suggest there are about three percent fewer deer today than there were 10 years ago, which is probably a conservative figure. Also, total annual deer harvest numbers are largely driven by antlerless harvest. Because most states use some type of quota system to control the antlerless harvest, the ebb and flow of total annual deer harvest data follows the whims of the managing agency. In my view, changes in the number of antlered bucks harvested annually might be more indicative of true deer population trends, but even those figures are influenced by declining deer hunter numbers and other factors. Still, the national antlered buck harvest declined by eight percent from 2003 through 2013, and probably more since then. Antlerless deer harvests decreased by about 12 percent during the same period, likely because fewer harvest permits were allotted.

buck harvest also decreased more than 16 percent in Florida, Louisiana and North Carolina. Given that recent trend, many deer managers reduced deer harvest quotas, as they strive to stabilize and/or increase slumping deer herds — the primary goal being to put more fawns on the ground to counter the effects of increased deer mortality from all causes. Meanwhile, many deer hunters, accustomed to super deer abundance and extremely liberal deer harvest regulations, are going home empty-handed and aren’t particularly happy.

Why the Decline? Reasons for declining deer numbers vary from one section of the country to the next. Although many factors are involved, the primary reason for fewer deer is that annual deer recruitment rates fail to keep up with deer mortality rates. That simply means on an annual basis, not enough newborn fawns survive to replace those deer that die. Excessive deer mortality has been attributed to disease, predation, drought, severe winter weather, deteriorating deer wintering habitat, poor fawn-rearing habitat and overharvest of antlerless deer. It’s important to recognize that although lack of recruitment is the common problem accounting for fewer deer, there’s no single common solution to the problem. The decrease in deer numbers has fueled controversy among members of the public, especially deer hunters, as well as politicians, wildlife managers and even deer researchers. Most arguments revolve around the merits of predator control and reducing antlerless deer harvest rates as a means of increasing annual deer recruitment for hunting. Others suggest that coyotes in residential areas benefit management because they help control deer numbers when hunters fail. I’ll admit this is complicated stuff. However, potential solutions to the problem can help stabilize, if not increase, deer numbers at the local level — provided managing agencies and land owners cooperate. As noted by South Carolina researcher John Kilgo, “Antlerless harvest programs in many states were designed during the 1980s and 1990s to control deer populations that were increasingly overabundant at the time. These liberal harvest limits were largely set prior to the widespread establishment of coyotes in the region and prior to the knowledge that coyotes could substantially affect recruitment.” The same can be said concerning gray wolves in the Upper Great Lakes region, especially as such knowledge applies to managing deer wintering habitat in deer snow country. Unfortunately, I’ve heard little regarding the anti-predator benefits involved in maintaining natural herd sex-age composition of proper deer social structure. Nor have foresters and biologists adequately explained how best to manage habitat to minimize periodically high deer loss to predation.

Autumn Nutrition As I noted in an earlier Whitetail News article, “For whitetails, autumn is an especially critical period — a time of physiological change and shift in nutritional requirements in preparation for the approaching stressful winter.” Young deer (fawns and yearlings) are especially vulnerable to nutritional shortage during autumn because they must simultaneously grow and fatten. Even adult deer nutritionally stressed during autumn can suffer consequences that lead to increased newborn fawn mortality. www.whitetailinstitute.com