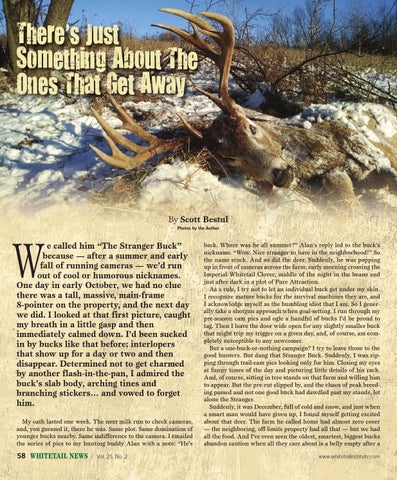 There’s Just Something About The Ones That Get Away

By Scott Bestul Photos by the Author

e called him “The Stranger Buck” because — after a summer and early fall of running cameras — we’d run out of cool or humorous nicknames. One day in early October, we had no clue there was a tall, massive, main-frame 8-pointer on the property, and the next day we did. I looked at that first picture, caught my breath in a little gasp and then immediately calmed down. I’d been sucked in by bucks like that before; interlopers that show up for a day or two and then disappear. Determined not to get charmed by another flash-in-the-pan, I admired the buck’s slab body, arching tines and branching stickers… and vowed to forget him. My oath lasted one week. The next milk run to check cameras, and, you guessed it, there he was. Same plot. Same domination of younger bucks nearby. Same indifference to the camera. I emailed the series of pics to my hunting buddy Alan with a note: “He’s

back. Where was he all summer?” Alan’s reply led to the buck’s nickname. “Wow. Nice stranger to have in the neighborhood!” So the name stuck. And so did the deer. Suddenly, he was popping up in front of cameras across the farm; early morning crossing the Imperial Whitetail Clover, middle of the night in the beans and just after dark in a plot of Pure Attraction. As a rule, I try not to let an individual buck get under my skin. I recognize mature bucks for the survival machines they are, and I acknowledge myself as the bumbling idiot that I am. So I generally take a shotgun approach when goal-setting. I run through my pre-season cam pics and ogle a handful of bucks I’d be proud to tag. Then I leave the door wide open for any slightly smaller buck that might trip my trigger on a given day, and, of course, am completely susceptible to any newcomer. But a one-buck-or-nothing campaign? I try to leave those to the good hunters. But dang that Stranger Buck. Suddenly, I was zipping through trail-cam pics looking only for him. Closing my eyes at funny times of the day and picturing little details of his rack. And, of course, sitting in tree stands on that farm and willing him to appear. But the pre-rut slipped by, and the chaos of peak breeding passed and not one good buck had dawdled past my stands, let alone the Stranger. Suddenly, it was December, full of cold and snow, and just when a smart man would have given up, I found myself getting excited about that deer. The farm he called home had almost zero cover — the neighboring, off-limits property had all that — but we had all the food. And I’ve even seen the oldest, smartest, biggest bucks abandon caution when all they care about is a belly empty after a www.whitetailinstitute.com