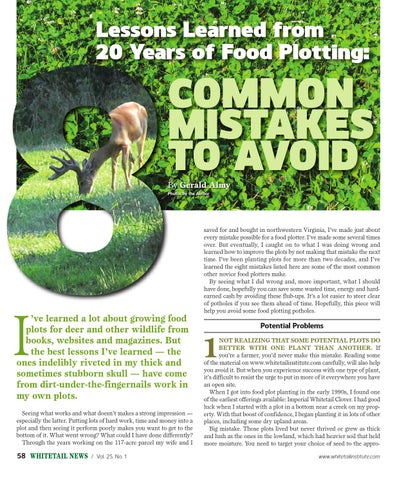 COMMON MISTAKES TO AVOID By Gerald Almy Photos by the Author

saved for and bought in northwestern Virginia, I’ve made just about every mistake possible for a food plotter. I’ve made some several times over. But eventually, I caught on to what I was doing wrong and learned how to improve the plots by not making that mistake the next time. I've been planting plots for more than two decades, and I’ve learned the eight mistakes listed here are some of the most common other novice food plotters make. By seeing what I did wrong and, more important, what I should have done, hopefully you can save some wasted time, energy and hardearned cash by avoiding these flub-ups. It’s a lot easier to steer clear of potholes if you see them ahead of time. Hopefully, this piece will help you avoid some food plotting potholes.

’ve learned a lot about growing food plots for deer and other wildlife from books, websites and magazines. But the best lessons I’ve learned — the ones indelibly riveted in my thick and sometimes stubborn skull — have come from dirt-under-the-fingernails work in my own plots. Seeing what works and what doesn’t makes a strong impression — especially the latter. Putting lots of hard work, time and money into a plot and then seeing it perform poorly makes you want to get to the bottom of it. What went wrong? What could I have done differently? Through the years working on the 117-acre parcel my wife and I

NOT REALIZING THAT SOME POTENTIAL PLOTS DO BETTER WITH ONE PLANT THAN ANOTHER. If you’re a farmer, you’d never make this mistake. Reading some of the material on www.whitetailinstitute.com carefully, will also help you avoid it. But when you experience success with one type of plant, it’s difficult to resist the urge to put in more of it everywhere you have an open site. When I got into food plot planting in the early 1990s, I found one of the earliest offerings available: Imperial Whitetail Clover. I had good luck when I started with a plot in a bottom near a creek on my property. With that boost of confidence, I began planting it in lots of other places, including some dry upland areas. Big mistake. Those plots lived but never thrived or grew as thick and lush as the ones in the lowland, which had heavier soil that held more moisture. You need to target your choice of seed to the approwww.whitetailinstitute.com