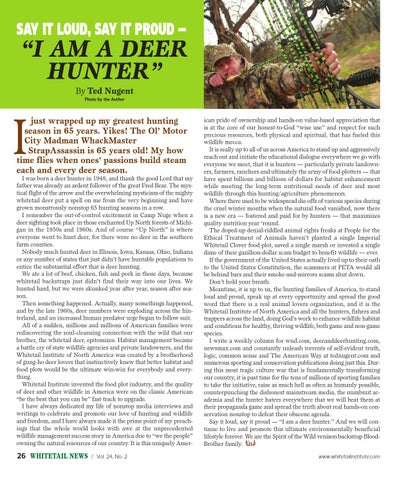 SAY IT LOUD, SAY IT PROUD —

just wrapped up my greatest hunting season in 65 years. Yikes! The Ol’ Motor City Madman WhackMaster StrapAssassin is 65 years old! My how time flies when ones’ passions build steam each and every deer season. I was born a deer hunter in 1948, and thank the good Lord that my father was already an ardent follower of the great Fred Bear. The mystical flight of the arrow and the overwhelming mysticism of the mighty whitetail deer put a spell on me from the very beginning and have grown monstrously nonstop 65 hunting seasons in a row. I remember the out-of-control excitement in Camp Nuge when a deer sighting took place in those enchanted Up North forests of Michigan in the 1950s and 1960s. And of course “Up North” is where everyone went to hunt deer, for there were no deer in the southern farm counties. Nobody much hunted deer in Illinois, Iowa, Kansas, Ohio, Indiana or any number of states that just didn’t have huntable populations to entice the substantial effort that is deer hunting. We ate a lot of beef, chicken, fish and pork in those days, because whitetail backstraps just didn’t find their way into our lives. We hunted hard, but we were skunked year after year, season after season. Then something happened. Actually, many somethings happened, and by the late 1960s, deer numbers were exploding across the hinterland, and an increased human predator urge began to follow suit. All of a sudden, millions and millions of American families were rediscovering the soul-cleansing connection with the wild that our brother, the whitetail deer, epitomizes. Habitat management became a battle cry of state wildlife agencies and private landowners, and the Whitetail Institute of North America was created by a brotherhood of gung-ho deer lovers that instinctively knew that better habitat and food plots would be the ultimate win-win for everybody and everything. Whitetail Institute invented the food plot industry, and the quality of deer and other wildlife in America were on the classic American “be the best that you can be” fast track to upgrade. I have always dedicated my life of nonstop media interviews and writings to celebrate and promote our love of hunting and wildlife and freedom, and I have always made it the prime point of my preachings that the whole world looks with awe at the unprecedented wildlife management success story in America due to “we the people” owning the natural resources of our country. It is this uniquely Amer-

ican pride of ownership and hands-on value-based appreciation that is at the core of our honest-to-God “wise use” and respect for such precious resources, both physical and spiritual, that has fueled this wildlife mecca. It is really up to all of us across America to stand up and aggressively reach out and initiate the educational dialogue everywhere we go with everyone we meet, that it is hunters — particularly private landowners, farmers, ranchers and ultimately the army of food-plotters — that have spent billions and billions of dollars for habitat enhancement while meeting the long-term nutritional needs of deer and most wildlife through this hunting/agriculture phenomenon. Where there used to be widespread die-offs of various species during the cruel winter months when the natural food vanished, now there is a new era — fostered and paid for by hunters — that maximizes quality nutrition year ‘round. The doped-up denial-riddled animal rights freaks at People for the Ethical Treatment of Animals haven’t planted a single Imperial Whitetail Clover food plot, saved a single marsh or invested a single dime of their gazillion-dollar scam budget to benefit wildlife — ever. If the government of the United States actually lived up to their oath to the United States Constitution, the scammers at PETA would all be behind bars and their smoke-and-mirrors scams shut down. Don’t hold your breath. Meantime, it is up to us, the hunting families of America, to stand loud and proud, speak up at every opportunity and spread the good word that there is a real animal lovers organization, and it is the Whitetail Institute of North America and all the hunters, fishers and trappers across the land, doing God’s work to enhance wildlife habitat and conditions for healthy, thriving wildlife, both game and non-game species. I write a weekly column for wnd.com, deeranddeerhunting.com, newsmax.com and constantly unleash torrents of self-evident truth, logic, common sense and The American Way at tednugent.com and numerous sporting and conservation publications doing just this. During this most tragic culture war that is fundamentally transforming our country, it is past time for the tens of millions of sporting families to take the initiative, raise as much hell as often as humanly possible, counterpunching the dishonest mainstream media, the numbnut academia and the hunter haters everywhere that we will beat them at their propaganda game and spread the truth about real hands-on conservation nonstop to defeat their obscene agenda. Say it loud, say it proud — “I am a deer hunter.” And we will continue to live and promote this ultimate environmentally beneficial lifestyle forever. We are the Spirit of the Wild venison backstrap BloodBrother family. ^ www.whitetailinstitute.com