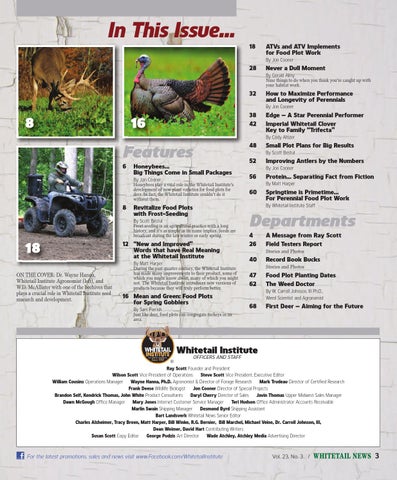 By Jon Cooner By Gerald Almy Nine things to do when you think you’re caught up with your habitat work.

How to Maximize Performance and Longevity of Perennials

16 Mean and Green: Food Plots for Spring Gobblers By Sam Parrish Just like deer, food plots can congregate turkeys in an area.

Improving Antlers by the Numbers

By Jon Cooner By Matt Harper

Revitalize Food Plots with Frost-Seeding By Scott Bestul Frost-seeding is an agricultural practice with a long history, and it’s as simple as its name implies. Seeds are broadcast during the late winter or early spring.

First Deer — Aiming for the Future