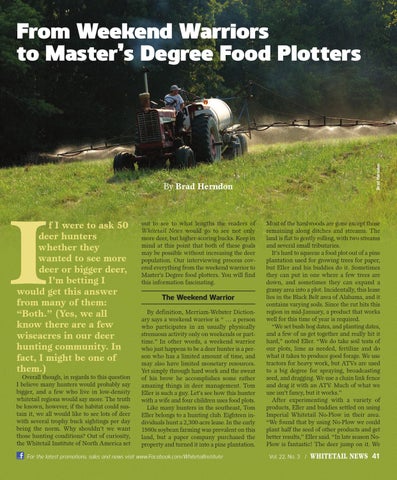 f I were to ask 50 deer hunters whether they wanted to see more deer or bigger deer, I’m betting I would get this answer from many of them: “Both.” (Yes, we all know there are a few wiseacres in our deer hunting community. In fact, I might be one of them.) Overall though, in regards to this question I believe many hunters would probably say bigger, and a few who live in low-density whitetail regions would say more. The truth be known, however, if the habitat could sustain it, we all would like to see lots of deer with several trophy buck sightings per day being the norm. Why shouldn’t we want those hunting conditions? Out of curiosity, the Whitetail Institute of North America set

out to see to what lengths the readers of Whitetail News would go to see not only more deer, but higher-scoring bucks. Keep in mind at this point that both of these goals may be possible without increasing the deer population. Our interviewing process covered everything from the weekend warrior to Master’s Degree food plotters. You will find this information fascinating.

The Weekend Warrior By definition, Merriam-Webster Dictionary says a weekend warrior is “ … a person who participates in an usually physically strenuous activity only on weekends or parttime.” In other words, a weekend warrior who just happens to be a deer hunter is a person who has a limited amount of time, and may also have limited monetary resources. Yet simply through hard work and the sweat of his brow he accomplishes some rather amazing things in deer management. Tom Eller is such a guy. Let’s see how this hunter with a wife and four children uses food plots. Like many hunters in the southeast, Tom Eller belongs to a hunting club. Eighteen individuals hunt a 2,300-acre lease. In the early 1980s soybean farming was prevalent on this land, but a paper company purchased the property and turned it into a pine plantation.

Most of the hardwoods are gone except those remaining along ditches and streams. The land is flat to gently rolling, with two streams and several small tributaries. It’s hard to squeeze a food plot out of a pine plantation used for growing trees for paper, but Eller and his buddies do it. Sometimes they can put in one where a few trees are down, and sometimes they can expand a grassy area into a plot. Incidentally, this lease lies in the Black Belt area of Alabama, and it contains varying soils. Since the rut hits this region in mid-January, a product that works well for this time of year is required. “We set bush hog dates, and planting dates, and a few of us get together and really hit it hard,” noted Eller. “We do take soil tests of our plots, lime as needed, fertilize and do what it takes to produce good forage. We use tractors for heavy work, but ATVs are used to a big degree for spraying, broadcasting seed, and dragging. We use a chain link fence and drag it with an ATV. Much of what we use isn’t fancy, but it works.” After experimenting with a variety of products, Eller and buddies settled on using Imperial Whitetail No-Plow in their area. “We found that by using No-Plow we could plant half the seed of other products and get better results,” Eller said. “In late season NoPlow is fantastic! The deer jump on it. We Vol. 22, No. 3 /