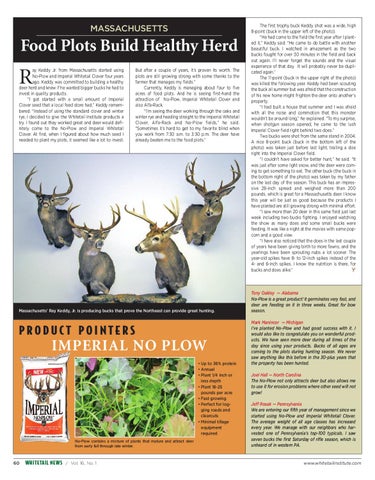 ay Keddy Jr. from Massachusetts started using No-Plow and Imperial Whitetail Clover four years ago. Keddy was committed to building a healthy deer herd and knew if he wanted bigger bucks he had to invest in quality products. “I got started with a small amount of Imperial Clover seed that a local feed store had,” Keddy remembered. “Instead of using the standard clover and winter rye, I decided to give the Whitetail Institute products a try. I found out they worked great and deer would definitely come to the No-Plow and Imperial Whitetail Clover. At first, when I figured about how much seed I needed to plant my plots, it seemed like a lot to invest.

But after a couple of years, it’s proven its worth. The plots are still growing strong with some thanks to the farmer that manages my fields.” Currently, Keddy is managing about four to five acres of food plots. And he is seeing first-hand the attraction of No-Plow, Imperial Whitetail Clover and also Alfa-Rack. “I’m seeing the deer working through the oaks and winter rye and heading straight to the Imperial Whitetail Clover, Alfa-Rack and No-Plow fields,” he said. “Sometimes it’s hard to get to my favorite blind when you work from 7:30 a.m. to 3:30 p.m. The deer have already beaten me to the food plots.”

The first trophy buck Keddy shot was a wide, high 8-point (buck in the upper left of the photo). “He had come to the field the first year after I planted it,” Keddy said. “He came to do battle with another beautiful buck. I watched in amazement as the two bucks fought for over 30 minutes in the field and back out again. I’ll never forget the sounds and the visual experience of that day. It will probably never be duplicated again.” The 11-point (buck in the upper right of the photo) was killed the following year. Keddy had been scouting the buck all summer but was afraid that the construction of his new home might frighten the deer onto another’s property. “I had built a house that summer and I was afraid with all the noise and commotion that this monster wouldn’t be around long,” he explained. “To my surprise, when shotgun season opened, he came to the lush Imperial Clover field right behind two does.” Two bucks were shot from the same stand in 2004. A nice 8-point buck (buck in the bottom left of the photo) was taken just before last light, trailing a doe right into the Imperial Clover field. “I couldn’t have asked for better hunt,” he said. “It was just after some light snow, and the deer were coming to get something to eat. The other buck (the buck in the bottom right of the photo) was taken by my father on the last day of the season. This buck has an impressive 28-inch spread and weighed more than 200 pounds, which is great for a Massachusetts deer. I know this year will be just as good because the products I have planted are still growing strong with minimal effort. “I saw more than 20 deer in this same field just last week including two bucks fighting. I enjoyed watching the show as many does and some small bucks were feeding. It was like a night at the movies with some popcorn and a good view. “I have also noticed that the does in the last couple of years have been giving birth to more fawns, and the yearlings have been sprouting nubs a lot sooner. The year-old spikes have 8- to 12-inch spikes instead of the 4- and 6-inch spikes. I know the nutrition is there, for bucks and does alike.” W

Tony Oakley — Alabama No-Plow is a great product! It germinates very fast, and deer are feeding on it in three weeks. Great for bow season. Mark Manincor — Michigan I’ve planted No-Plow and had good success with it. I would also like to congratulate you on wonderful products. We have seen more deer during all times of the day since using your products. Bucks of all ages are coming to the plots during hunting season. We never saw anything like this before in the 30-plus years that the property has been hunted. Joel Hall — North Carolina The No-Plow not only attracts deer but also allows me to use it for erosion problems where other seed will not grow! Jeff Rosak — Pennsylvania We are entering our fifth year of management since we started using No-Plow and Imperial Whitetail Clover. The average weight of all age classes has increased every year. We manage with our neighbors who harvested one of Pennsylvania’s top-100 typicals. I saw seven bucks the first Saturday of rifle season, which is unheard of in western PA.