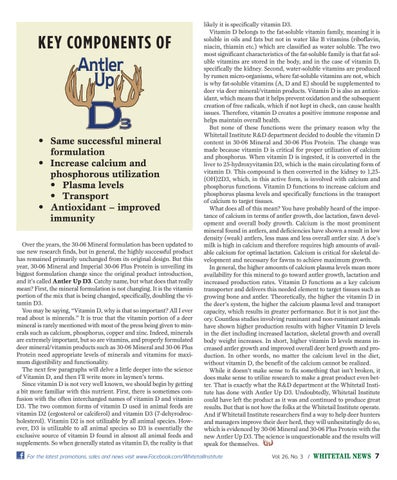 • Same successful mineral formulation • Increase calcium and phosphorous utilization • Plasma levels • Transport • Antioxidant – improved immunity Over the years, the 30-06 Mineral formulation has been updated to use new research finds, but in general, the highly successful product has remained primarily unchanged from its original design. But this year, 30-06 Mineral and Imperial 30-06 Plus Protein is unveiling its biggest formulation change since the original product introduction, and it’s called Antler Up D3. Catchy name, but what does that really mean? First, the mineral formulation is not changing. It is the vitamin portion of the mix that is being changed, specifically, doubling the vitamin D3. You may be saying, “Vitamin D, why is that so important? All I ever read about is minerals.” It is true that the vitamin portion of a deer mineral is rarely mentioned with most of the press being given to minerals such as calcium, phosphorus, copper and zinc. Indeed, minerals are extremely important, but so are vitamins, and properly formulated deer mineral/vitamin products such as 30-06 Mineral and 30-06 Plus Protein need appropriate levels of minerals and vitamins for maximum digestibility and functionality. The next few paragraphs will delve a little deeper into the science of Vitamin D, and then I’ll write more in laymen’s terms. Since vitamin D is not very well known, we should begin by getting a bit more familiar with this nutrient. First, there is sometimes confusion with the often interchanged names of vitamin D and vitamin D3. The two common forms of vitamin D used in animal feeds are vitamin D2 (ergosterol or calciferol) and vitamin D3 (7-dehyrodrocholesterol). Vitamin D2 is not utilizable by all animal species. However, D3 is utilizable to all animal species so D3 is essentially the exclusive source of vitamin D found in almost all animal feeds and supplements. So when generally stated as vitamin D, the reality is that

likely it is specifically vitamin D3. Vitamin D belongs to the fat-soluble vitamin family, meaning it is soluble in oils and fats but not in water like B vitamins (riboflavin, niacin, thiamin etc.) which are classified as water soluble. The two most significant characteristics of the fat-soluble family is that fat soluble vitamins are stored in the body, and in the case of vitamin D, specifically the kidney. Second, water-soluble vitamins are produced by rumen micro-organisms, where fat-soluble vitamins are not, which is why fat-soluble vitamins (A, D and E) should be supplemented to deer via deer mineral/vitamin products. Vitamin D is also an antioxidant, which means that it helps prevent oxidation and the subsequent creation of free radicals, which if not kept in check, can cause health issues. Therefore, vitamin D creates a positive immune response and helps maintain overall health. But none of these functions were the primary reason why the Whitetail Institute R&D department decided to double the vitamin D content in 30-06 Mineral and 30-06 Plus Protein. The change was made because vitamin D is critical for proper utilization of calcium and phosphorus. When vitamin D is ingested, it is converted in the liver to 25-hydroxyvitamin D3, which is the main circulating form of vitamin D. This compound is then converted in the kidney to 1,25(OH)2D3, which, in this active form, is involved with calcium and phosphorus functions. Vitamin D functions to increase calcium and phosphorus plasma levels and specifically functions in the transport of calcium to target tissues. What does all of this mean? You have probably heard of the importance of calcium in terms of antler growth, doe lactation, fawn development and overall body growth. Calcium is the most prominent mineral found in antlers, and deficiencies have shown a result in low density (weak) antlers, less mass and less overall antler size. A doe’s milk is high in calcium and therefore requires high amounts of available calcium for optimal lactation. Calcium is critical for skeletal development and necessary for fawns to achieve maximum growth. In general, the higher amounts of calcium plasma levels mean more availability for this mineral to go toward antler growth, lactation and increased production rates. Vitamin D functions as a key calcium transporter and delivers this needed element to target tissues such as growing bone and antler. Theoretically, the higher the vitamin D in the deer’s system, the higher the calcium plasma level and transport capacity, which results in greater performance. But it is not just theory. Countless studies involving ruminant and non-ruminant animals have shown higher production results with higher Vitamin D levels in the diet including increased lactation, skeletal growth and overall body weight increases. In short, higher vitamin D levels means increased antler growth and improved overall deer herd growth and production. In other words, no matter the calcium level in the diet, without vitamin D, the benefit of the calcium cannot be realized. While it doesn’t make sense to fix something that isn’t broken, it does make sense to utilize research to make a great product even better. That is exactly what the R&D department at the Whitetail Institute has done with Antler Up D3. Undoubtedly, Whitetail Institute could have left the product as it was and continued to produce great results. But that is not how the folks at the Whitetail Institute operate. And if Whitetail Institute researchers find a way to help deer hunters and managers improve their deer herd, they will unhesitatingly do so, which is evidenced by 30-06 Mineral and 30-06 Plus Protein with the new Antler Up D3. The science is unquestionable and the results will speak for themselves. ^