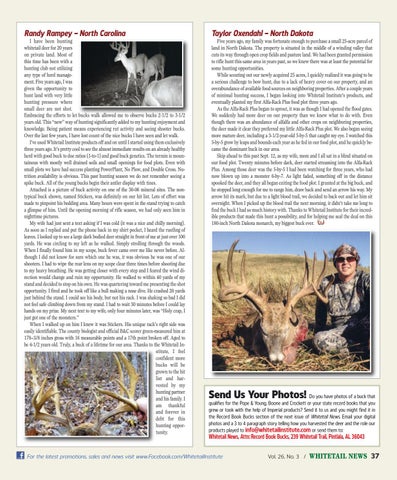 I have been hunting whitetail deer for 20 years on private land. Most of this time has been with a hunting club not utilizing any type of herd management. Five years ago, I was given the opportunity to hunt land with very little hunting pressure where small deer are not shot. Embracing the efforts to let bucks walk allowed me to observe bucks 2-1/2 to 3-1/2 years old. This “new” way of hunting significantly added to my hunting enjoyment and knowledge. Being patient means experiencing rut activity and seeing shooter bucks. Over the last few years, I have lost count of the nice bucks I have seen and let walk. I’ve used Whitetail Institute products off and on until I started using them exclusively three years ago. It’s pretty cool to see the almost immediate results on an already healthy herd with good buck to doe ratios (1-to-1) and good buck genetics. The terrain is mountainous with mostly well drained soils and small openings for food plots. Even with small plots we have had success planting PowerPlant, No Plow, and Double Cross. Nutrition availability is obvious. This past hunting season we do not remember seeing a spike buck. All of the young bucks begin their antler display with tines. Attached is a picture of buck activity on one of the 30-06 mineral sites. The nontypical buck shown, named Stickers, was definitely on our hit list. Lots of effort was made to pinpoint his bedding area. Many hours were spent in the stand trying to catch a glimpse of him. Until the opening morning of rifle season, we had only seen him in nighttime pictures. My wife had just sent a text asking if I was cold (it was a nice and chilly morning). As soon as I replied and put the phone back in my shirt pocket, I heard the rustling of leaves. I looked up to see a large dark bodied deer straight in front of me at just over 100 yards. He was circling to my left as he walked. Simply strolling through the woods. When I finally found him in my scope, buck fever came over me like never before. Although I did not know for sure which one he was, it was obvious he was one of our shooters. I had to wipe the rear lens on my scope clear three times before shooting due to my heavy breathing. He was getting closer with every step and I feared the wind direction would change and ruin my opportunity. He walked to within 40 yards of my stand and decided to stop on his own. He was quartering toward me presenting the shot opportunity. I fired and he took off like a bull making a nose dive. He crashed 20 yards just behind the stand. I could see his body, but not his rack. I was shaking so bad I did not feel safe climbing down from my stand. I had to wait 30 minutes before I could lay hands on my prize. My next text to my wife, only four minutes later, was “Holy crap, I just got one of the monsters.” When I walked up on him I knew it was Stickers. His unique rack’s right side was easily identifiable. The county biologist and official B&C scorer green-measured him at 178–3/8 inches gross with 16 measurable points and a 17th point broken off. Aged to be 4-1/2 years old. Truly, a buck of a lifetime for our area. Thanks to the Whitetail Institute, I feel confident more bucks will be grown to the hit list and harvested by my hunting partner and his family. I am thankful and forever in debt for this hunting opportunity.

Five years ago, my family was fortunate enough to purchase a small 25-acre parcel of land in North Dakota. The property is situated in the middle of a winding valley that cuts its way through open crop fields and pasture land. We had been granted permission to rifle hunt this same area in years past, so we knew there was at least the potential for some hunting opportunities. While scouting out our newly acquired 25 acres, I quickly realized it was going to be a serious challenge to bow hunt, due to a lack of heavy cover on our property, and an overabundance of available food sources on neighboring properties. After a couple years of minimal hunting success, I began looking into Whitetail Institute's products, and eventually planted my first Alfa-Rack Plus food plot three years ago. As the Alfa-Rack Plus began to sprout, it was as though I had opened the flood gates. We suddenly had more deer on our property than we knew what to do with. Even though there was an abundance of alfalfa and other crops on neighboring properties, the deer made it clear they preferred my little Alfa-Rack Plus plot. We also began seeing more mature deer, including a 3-1/2-year-old 5-by-5 that caught my eye. I watched this 5-by-5 grow by leaps and bounds each year as he fed in our food plot, and he quickly became the dominant buck in our area. Skip ahead to this past Sept. 12, as my wife, mom and I all sat in a blind situated on our food plot. Twenty minutes before dark, deer started streaming into the Alfa-Rack Plus. Among those deer was the 5-by-5 I had been watching for three years, who had now blown up into a monster 6-by-7. As light faded, something off in the distance spooked the deer, and they all began exiting the food plot. I grunted at the big buck, and he stopped long enough for me to range him, draw back and send an arrow his way. My arrow hit its mark, but due to a light blood trail, we decided to back out and let him sit overnight. When I picked up the blood trail the next morning, it didn't take me long to find the buck I had so much history with. Thanks to Whitetail Institute for their incredible products that made this hunt a possibility, and for helping me seal the deal on this 180-inch North Dakota monarch, my biggest buck ever. ^

Send Us Your Photos!

Do you have photos of a buck that qualifies for the Pope & Young, Boone and Crockett or your state record books that you grew or took with the help of Imperial products? Send it to us and you might find it in the Record Book Bucks section of the next issue of Whitetail News. Email your digital photos and a 3 to 4 paragraph story telling how you harvested the deer and the role our products played to info@whitetailinstitute.com or send them to: