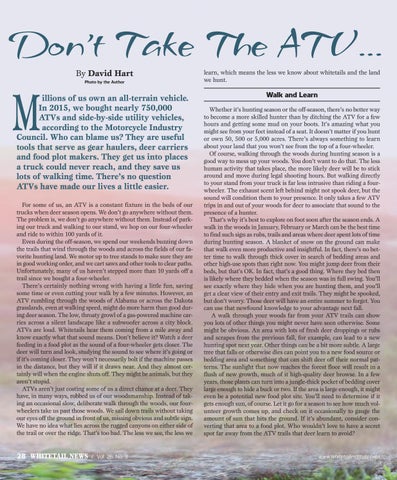 illions of us own an all-terrain vehicle. In 2015, we bought nearly 750,000 ATVs and side-by-side utility vehicles, according to the Motorcycle Industry Council. Who can blame us? They are useful tools that serve as gear haulers, deer carriers and food plot makers. They get us into places a truck could never reach, and they save us lots of walking time. There’s no question ATVs have made our lives a little easier. For some of us, an ATV is a constant fixture in the beds of our trucks when deer season opens. We don’t go anywhere without them. The problem is, we don’t go anywhere without them. Instead of parking our truck and walking to our stand, we hop on our four-wheeler and ride to within 100 yards of it. Even during the off-season, we spend our weekends buzzing down the trails that wind through the woods and across the fields of our favorite hunting land. We motor up to tree stands to make sure they are in good working order, and we cart saws and other tools to clear paths. Unfortunately, many of us haven’t stepped more than 10 yards off a trail since we bought a four-wheeler. There’s certainly nothing wrong with having a little fun, saving some time or even cutting your walk by a few minutes. However, an ATV rumbling through the woods of Alabama or across the Dakota grasslands, even at walking speed, might do more harm than good during deer season. The low, throaty growl of a gas-powered machine carries across a silent landscape like a subwoofer across a city block. ATVs are loud. Whitetails hear them coming from a mile away and know exactly what that sound means. Don’t believe it? Watch a deer feeding in a food plot as the sound of a four-wheeler gets closer. The deer will turn and look, studying the sound to see where it’s going or if it’s coming closer. They won’t necessarily bolt if the machine passes in the distance, but they will if it draws near. And they almost certainly will when the engine shuts off. They might be animals, but they aren’t stupid. ATVs aren’t just costing some of us a direct chance at a deer. They have, in many ways, robbed us of our woodsmanship. Instead of taking an occasional slow, deliberate walk through the woods, our fourwheelers take us past those woods. We sail down trails without taking our eyes off the ground in front of us, missing obvious and subtle sign. We have no idea what lies across the rugged canyons on either side of the trail or over the ridge. That’s too bad. The less we see, the less we

learn, which means the less we know about whitetails and the land we hunt.

Walk and Learn Whether it’s hunting season or the off-season, there’s no better way to become a more skilled hunter than by ditching the ATV for a few hours and getting some mud on your boots. It’s amazing what you might see from your feet instead of a seat. It doesn’t matter if you hunt or own 50, 500 or 5,000 acres. There’s always something to learn about your land that you won’t see from the top of a four-wheeler. Of course, walking through the woods during hunting season is a good way to mess up your woods. You don’t want to do that. The less human activity that takes place, the more likely deer will be to stick around and move during legal shooting hours. But walking directly to your stand from your truck is far less intrusive than riding a fourwheeler. The exhaust scent left behind might not spook deer, but the sound will condition them to your presence. It only takes a few ATV trips in and out of your woods for deer to associate that sound to the presence of a hunter. That’s why it’s best to explore on foot soon after the season ends. A walk in the woods in January, February or March can be the best time to find such sign as rubs, trails and areas where deer spent lots of time during hunting season. A blanket of snow on the ground can make that walk even more productive and insightful. In fact, there’s no better time to walk through thick cover in search of bedding areas and other high-use spots than right now. You might jump deer from their beds, but that’s OK. In fact, that’s a good thing. Where they bed then is likely where they bedded when the season was in full swing. You’ll see exactly where they hide when you are hunting them, and you’ll get a clear view of their entry and exit trails. They might be spooked, but don’t worry. Those deer will have an entire summer to forget. You can use that newfound knowledge to your advantage next fall. A walk through your woods far from your ATV trails can show you lots of other things you might never have seen otherwise. Some might be obvious. An area with lots of fresh deer droppings or rubs and scrapes from the previous fall, for example, can lead to a new hunting spot next year. Other things can be a bit more subtle. A large tree that falls or otherwise dies can point you to a new food source or bedding area and something that can shift deer off their normal patterns. The sunlight that now reaches the forest floor will result in a flush of new growth, much of it high-quality deer browse. In a few years, those plants can turn into a jungle-thick pocket of bedding cover large enough to hide a buck or two. If the area is large enough, it might even be a potential new food plot site. You’ll need to determine if it gets enough sun, of course. Let it go for a season to see how much volunteer growth comes up, and check on it occasionally to gauge the amount of sun that hits the ground. If it’s abundant, consider converting that area to a food plot. Who wouldn’t love to have a secret spot far away from the ATV trails that deer learn to avoid?