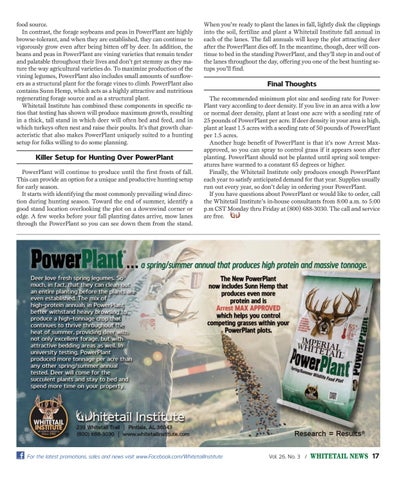 food source. In contrast, the forage soybeans and peas in PowerPlant are highly browse-tolerant, and when they are established, they can continue to vigorously grow even after being bitten off by deer. In addition, the beans and peas in PowerPlant are vining varieties that remain tender and palatable throughout their lives and don’t get stemmy as they mature the way agricultural varieties do. To maximize production of the vining legumes, PowerPlant also includes small amounts of sunflowers as a structural plant for the forage vines to climb. PowerPlant also contains Sunn Hemp, which acts as a highly attractive and nutritious regenerating forage source and as a structural plant. Whitetail Institute has combined these components in specific ratios that testing has shown will produce maximum growth, resulting in a thick, tall stand in which deer will often bed and feed, and in which turkeys often nest and raise their poults. It’s that growth characteristic that also makes PowerPlant uniquely suited to a hunting setup for folks willing to do some planning.

Killer Setup for Hunting Over PowerPlant PowerPlant will continue to produce until the first frosts of fall. This can provide an option for a unique and productive hunting setup for early season. It starts with identifying the most commonly prevailing wind direction during hunting season. Toward the end of summer, identify a good stand location overlooking the plot on a downwind corner or edge. A few weeks before your fall planting dates arrive, mow lanes through the PowerPlant so you can see down them from the stand.

When you’re ready to plant the lanes in fall, lightly disk the clippings into the soil, fertilize and plant a Whitetail Institute fall annual in each of the lanes. The fall annuals will keep the plot attracting deer after the PowerPlant dies off. In the meantime, though, deer will continue to bed in the standing PowerPlant, and they’ll step in and out of the lanes throughout the day, offering you one of the best hunting setups you’ll find.

Final Thoughts The recommended minimum plot size and seeding rate for PowerPlant vary according to deer density. If you live in an area with a low or normal deer density, plant at least one acre with a seeding rate of 25 pounds of PowerPlant per acre. If deer density in your area is high, plant at least 1.5 acres with a seeding rate of 50 pounds of PowerPlant per 1.5 acres. Another huge benefit of PowerPlant is that it’s now Arrest Maxapproved, so you can spray to control grass if it appears soon after planting. PowerPlant should not be planted until spring soil temperatures have warmed to a constant 65 degrees or higher. Finally, the Whitetail Institute only produces enough PowerPlant each year to satisfy anticipated demand for that year. Supplies usually run out every year, so don’t delay in ordering your PowerPlant. If you have questions about PowerPlant or would like to order, call the Whitetail Institute’s in-house consultants from 8:00 a.m. to 5:00 p.m CST Monday thru Friday at (800) 688-3030. The call and service are free. ^