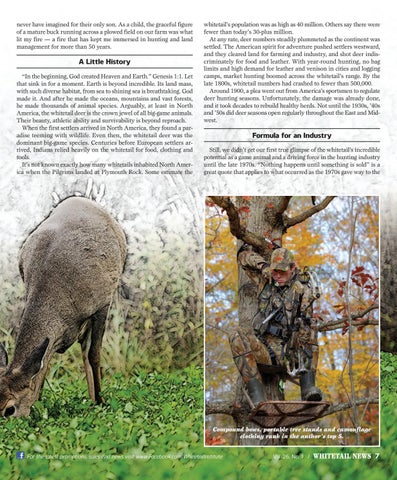 never have imagined for their only son. As a child, the graceful figure of a mature buck running across a plowed field on our farm was what lit my fire — a fire that has kept me immersed in hunting and land management for more than 50 years.

A Little History “In the beginning, God created Heaven and Earth.” Genesis 1:1. Let that sink in for a moment. Earth is beyond incredible. Its land mass, with such diverse habitat, from sea to shining sea is breathtaking. God made it. And after he made the oceans, mountains and vast forests, he made thousands of animal species. Arguably, at least in North America, the whitetail deer is the crown jewel of all big-game animals. Their beauty, athletic ability and survivability is beyond reproach. When the first settlers arrived in North America, they found a paradise teeming with wildlife. Even then, the whitetail deer was the dominant big-game species. Centuries before European settlers arrived, Indians relied heavily on the whitetail for food, clothing and tools. It’s not known exactly how many whitetails inhabited North America when the Pilgrims landed at Plymouth Rock. Some estimate the

whitetail’s population was as high as 40 million. Others say there were fewer than today’s 30-plus million. At any rate, deer numbers steadily plummeted as the continent was settled. The American spirit for adventure pushed settlers westward, and they cleared land for farming and industry, and shot deer indiscriminately for food and leather. With year-round hunting, no bag limits and high demand for leather and venison in cities and logging camps, market hunting boomed across the whitetail’s range. By the late 1800s, whitetail numbers had crashed to fewer than 500,000. Around 1900, a plea went out from America’s sportsmen to regulate deer hunting seasons. Unfortunately, the damage was already done, and it took decades to rebuild healthy herds. Not until the 1930s, ’40s and ’50s did deer seasons open regularly throughout the East and Midwest.

Formula for an Industry Still, we didn’t get our first true glimpse of the whitetail’s incredible potential as a game animal and a driving force in the hunting industry until the late 1970s. “Nothing happens until something is sold” is a great quote that applies to what occurred as the 1970s gave way to the