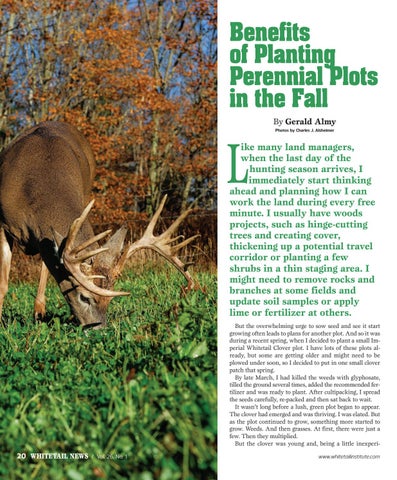 Benefits of Planting Perennial Plots in the Fall By Gerald Almy Photos by Charles J. Alsheimer

ike many land managers, when the last day of the hunting season arrives, I immediately start thinking ahead and planning how I can work the land during every free minute. I usually have woods projects, such as hinge-cutting trees and creating cover, thickening up a potential travel corridor or planting a few shrubs in a thin staging area. I might need to remove rocks and branches at some fields and update soil samples or apply lime or fertilizer at others. But the overwhelming urge to sow seed and see it start growing often leads to plans for another plot. And so it was during a recent spring, when I decided to plant a small Imperial Whitetail Clover plot. I have lots of these plots already, but some are getting older and might need to be plowed under soon, so I decided to put in one small clover patch that spring. By late March, I had killed the weeds with glyphosate, tilled the ground several times, added the recommended fertilizer and was ready to plant. After cultipacking, I spread the seeds carefully, re-packed and then sat back to wait. It wasnâ&#x20AC;&#x2122;t long before a lush, green plot began to appear. The clover had emerged and was thriving. I was elated. But as the plot continued to grow, something more started to grow. Weeds. And then grasses. At first, there were just a few. Then they multiplied. But the clover was young and, being a little inexperi-