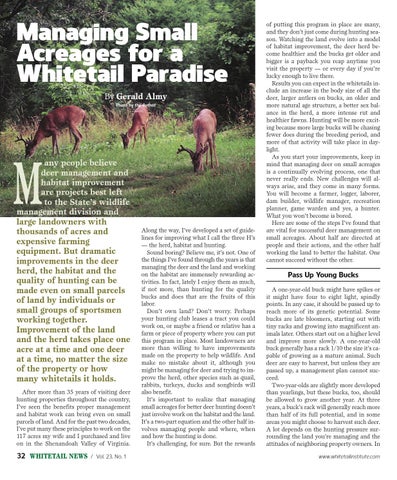 any people believe deer management and habitat improvement are projects best left to the State’s wildlife management division and large landowners with thousands of acres and expensive farming equipment. But dramatic improvements in the deer herd, the habitat and the quality of hunting can be made even on small parcels of land by individuals or small groups of sportsmen working together. Improvement of the land and the herd takes place one acre at a time and one deer at a time, no matter the size of the property or how many whitetails it holds. After more than 35 years of visiting deer hunting properties throughout the country, I’ve seen the benefits proper management and habitat work can bring even on small parcels of land. And for the past two decades, I’ve put many these principles to work on the 117 acres my wife and I purchased and live on in the Shenandoah Valley of Virginia.

Along the way, I’ve developed a set of guidelines for improving what I call the three H’s — the herd, habitat and hunting. Sound boring? Believe me, it’s not. One of the things I’ve found through the years is that managing the deer and the land and working on the habitat are immensely rewarding activities. In fact, lately I enjoy them as much, if not more, than hunting for the quality bucks and does that are the fruits of this labor. Don’t own land? Don’t worry. Perhaps your hunting club leases a tract you could work on, or maybe a friend or relative has a farm or piece of property where you can put this program in place. Most landowners are more than willing to have improvements made on the property to help wildlife. And make no mistake about it, although you might be managing for deer and trying to improve the herd, other species such as quail, rabbits, turkeys, ducks and songbirds will also benefit. It’s important to realize that managing small acreages for better deer hunting doesn’t just involve work on the habitat and the land. It’s a two-part equation and the other half involves managing people and where, when and how the hunting is done. It’s challenging, for sure. But the rewards

of putting this program in place are many, and they don’t just come during hunting season. Watching the land evolve into a model of habitat improvement, the deer herd become healthier and the bucks get older and bigger is a payback you reap anytime you visit the property — or every day if you’re lucky enough to live there. Results you can expect in the whitetails include an increase in the body size of all the deer, larger antlers on bucks, an older and more natural age structure, a better sex balance in the herd, a more intense rut and healthier fawns. Hunting will be more exciting because more large bucks will be chasing fewer does during the breeding period, and more of that activity will take place in daylight. As you start your improvements, keep in mind that managing deer on small acreages is a continually evolving process, one that never really ends. New challenges will always arise, and they come in many forms. You will become a farmer, logger, laborer, dam builder, wildlife manager, recreation planner, game warden and yes, a hunter. What you won’t become is bored. Here are some of the steps I’ve found that are vital for successful deer management on small acreages. About half are directed at people and their actions, and the other half working the land to better the habitat. One cannot succeed without the other.

Pass Up Young Bucks A one-year-old buck might have spikes or it might have four to eight light, spindly points. In any case, it should be passed up to reach more of its genetic potential. Some bucks are late bloomers, starting out with tiny racks and growing into magnificent animals later. Others start out on a higher level and improve more slowly. A one-year-old buck generally has a rack 1/10 the size it’s capable of growing as a mature animal. Such deer are easy to harvest, but unless they are passed up, a management plan cannot succeed. Two-year-olds are slightly more developed than yearlings, but these bucks, too, should be allowed to grow another year. At three years, a buck’s rack will generally reach more than half of its full potential, and in some areas you might choose to harvest such deer. A lot depends on the hunting pressure surrounding the land you’re managing and the attitudes of neighboring property owners. In www.whitetailinstitute.com