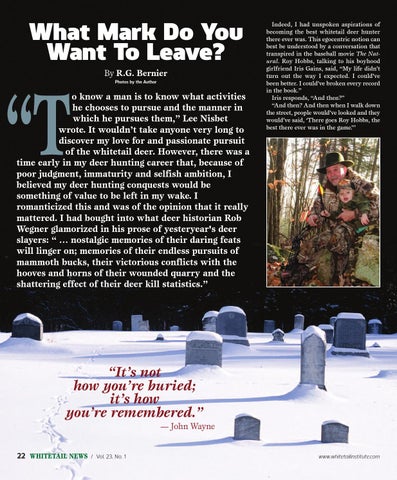 What Mark Do You Want To Leave? By R.G. Bernier Photos by the Author

o know a man is to know what activities he chooses to pursue and the manner in which he pursues them,” Lee Nisbet wrote. It wouldn’t take anyone very long to discover my love for and passionate pursuit of the whitetail deer. However, there was a time early in my deer hunting career that, because of poor judgment, immaturity and selfish ambition, I believed my deer hunting conquests would be something of value to be left in my wake. I romanticized this and was of the opinion that it really mattered. I had bought into what deer historian Rob Wegner glamorized in his prose of yesteryear's deer slayers: “ … nostalgic memories of their daring feats will linger on; memories of their endless pursuits of mammoth bucks, their victorious conflicts with the hooves and horns of their wounded quarry and the shattering effect of their deer kill statistics.”

Indeed, I had unspoken aspirations of becoming the best whitetail deer hunter there ever was. This egocentric notion can best be understood by a conversation that transpired in the baseball movie The Natural. Roy Hobbs, talking to his boyhood girlfriend Iris Gains, said, “My life didn’t turn out the way I expected. I could've been better. I could’ve broken every record in the book.” Iris responds, “And then?” “And then? And then when I walk down the street, people would’ve looked and they would’ve said, ‘There goes Roy Hobbs, the best there ever was in the game.’”