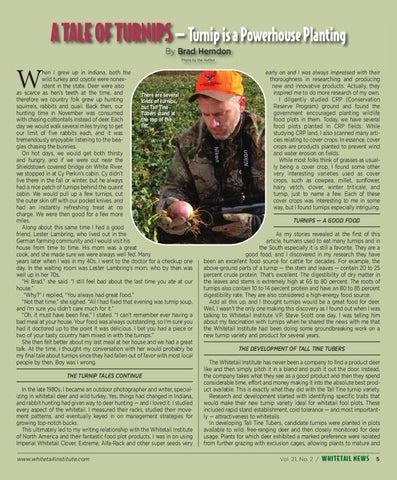 hen I grew up in Indiana, both the wild turkey and coyote were nonexistent in the state. Deer were also as scarce as hen’s teeth at the time, and There are several therefore we country folk grew up hunting kinds of turnips, squirrels, rabbits and quail. Back then, our but Tall Tine hunting time in November was consumed Tubers stand at the top of the with chasing cottontails instead of deer. Each list. day we would walk several miles trying to get our limit of five rabbits each, and it was tremendously enjoyable listening to the beagles chasing the bunnies. On hot days, we would get both thirsty and hungry, and if we were out near the Shieldstown covered bridge on White River, we stopped in at Cy Perkin’s cabin. Cy didn’t live there in the fall or winter, but he always had a nice patch of turnips behind the quaint cabin. We would pull up a few turnips, cut the outer skin off with our pocket knives, and had an instantly refreshing treat at no charge. We were then good for a few more miles. Along about this same time I had a good friend, Lester Lambring, who lived out in the German farming community and I would visit his house from time to time. His mom was a great cook, and she made sure we were always well fed. Many years later when I was in my 40s, I went to the doctor for a checkup one day. In the waiting room was Lester Lambring’s mom, who by then was well up in her 70s. “Hi Brad,” she said. “I still feel bad about the last time you ate at our house.” “Why?” I replied, “You always had great food.” “Not that time,” she sighed. “All I had fixed that evening was turnip soup, and I’m sure you didn’t care much for it.” “Oh, it must have been fine,” I stated. “I can’t remember ever having a bad meal at your house. Your food was always outstanding, so I’m sure you had it doctored up to the point it was delicious. I bet you had a piece or two of your tasty country ham mixed in with the turnips.” She then felt better about my last meal at her house and we had a great talk. At the time, I thought my conversation with her would probably be my final tale about turnips since they had fallen out of favor with most local people by then. Boy was I wrong. THE TURNIP TALES CONTINUE In the late 1980s, I became an outdoor photographer and writer, specializing in whitetail deer and wild turkey. Yes, things had changed in Indiana, and rabbit hunting had given way to deer hunting — and I loved it. I studied every aspect of the whitetail. I measured their racks, studied their movement patterns, and eventually keyed in on management strategies for growing top-notch bucks. This ultimately led to my writing relationship with the Whitetail Institute of North America and their fantastic food plot products. I was in on using Imperial Whitetail Clover, Extreme, Alfa-Rack and other super seeds very www.whitetailinstitute.com

early on and I was always impressed with their thoroughness in researching and producing new and innovative products. Actually, they inspired me to do more research of my own. I diligently studied CRP (Conservation Reserve Program) ground and found the government encouraged planting wildlife food plots in them. Today, we have several food plots planted in CRP fields. While studying CRP land, I also scanned many articles relating to cover crops. In essence, cover crops are products planted to prevent wind and water erosion on fields. While most folks think of grasses as usually being a cover crop, I found some other very interesting varieties used as cover crops, such as cowpea, millet, sunflower, hairy vetch, clover, winter triticale, and turnip, just to name a few. Each of these cover crops was interesting to me in some way, but I found turnips especially intriguing. TURNIPS — A GOOD FOOD As my stories revealed at the first of this article, humans used to eat many turnips and in the South especially it is still a favorite. They are a good food, and I discovered in my research they have been an excellent food source for cattle for decades. For example, the above-ground parts of a turnip — the stem and leaves — contain 20 to 25 percent crude protein. That’s excellent. The digestibility of dry matter in the leaves and stems is extremely high at 65 to 80 percent. The roots of turnips also contain 10 to 14 percent protein and have an 80 to 85 percent digestibility rate. They are also considered a high-energy food source. Add all this up, and I thought turnips would be a great food for deer. Well, I wasn’t the only one making this discovery as I found out when I was talking to Whitetail Institute V.P. Steve Scott one day. I was telling him about my fascination with turnips when he shared the news with me that the Whitetail Institute had been doing some groundbreaking work on a new turnip variety and product for several years. THE DEVELOPMENT OF TALL TINE TUBERS The Whitetail Institute has never been a company to find a product deer like and then simply pitch it in a blend and push it out the door. Instead, the company takes what they see as a good product and then they spend considerable time, effort and money making it into the absolute best product available. This is exactly what they did with the Tall Tine turnip variety. Research and development started with identifying specific traits that would make their new turnip variety ideal for whitetail fool plots. These included rapid stand establishment, cold tolerance — and most importantly — attractiveness to whitetails. In developing Tall Tine Tubers, candidate turnips were planted in plots available to wild, free-ranging deer and then closely monitored for deer usage. Plants for which deer exhibited a marked preference were isolated from further grazing with exclusion cages, allowing plants to mature and Vol. 21, No. 2 /