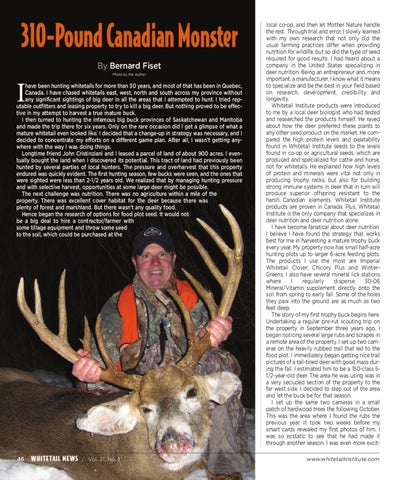 310-Pound Canadian Monster By Bernard Fiset Photo by the Author

have been hunting whitetails for more than 30 years, and most of that has been in Quebec, Canada. I have chased whitetails east, west, north and south across my province without any significant sightings of big deer in all the areas that I attempted to hunt. I tried reputable outfitters and leasing property to try to kill a big deer. But nothing proved to be effective in my attempt to harvest a true mature buck. I then turned to hunting the infamous big buck provinces of Saskatchewan and Manitoba and made the trip there for six years. Only on the rare occasion did I get a glimpse of what a mature whitetail even looked like. I decided that a change-up in strategy was necessary, and I decided to concentrate my efforts on a different game plan. After all, I wasnâ&#x20AC;&#x2122;t getting anywhere with the way I was doing things. Longtime friend John Cristinziani and I leased a parcel of land of about 900 acres. I eventually bought the land when I discovered its potential. This tract of land had previously been hunted by several parties of local hunters. The pressure and overharvest that this property endured was quickly evident. The first hunting season, few bucks were seen, and the ones that were sighted were less than 2-1/2 years old. We realized that by managing hunting pressure and with selective harvest, opportunities at some large deer might be possible. The next challenge was nutrition. There was no agriculture within a mile of the property. There was excellent cover habitat for the deer because there was plenty of forest and marshland. But there wasnâ&#x20AC;&#x2122;t any quality food. Hence began the research of options for food plot seed. It would not be a big deal to hire a contractor/farmer with some tillage equipment and throw some seed to the soil, which could be purchased at the

local co-op, and then let Mother Nature handle the rest. Through trial and error, I slowly learned with my own research that not only did the usual farming practices differ when providing nutrition for wildlife, but so did the type of seed required for good results. I had heard about a company in the United States specializing in deer nutrition. Being an entrepreneur and, more important, a manufacturer, I know what it means to specialize and be the best in your field based on research, development, credibility and longevity. Whitetail Institute products were introduced to me by a local deer biologist who had tested and researched the products himself. He raved about how the deer preferred these plants to any other seed product on the market. He compared the high protein levels and palatability found in Whitetail Institute seeds to the levels found in co-op or agricultural seeds, which are produced and specialized for cattle and horse, not for whitetails. He explained how high levels of protein and minerals were vital not only in producing trophy racks, but also for building strong immune systems in deer that in turn will produce superior offspring resistant to the harsh Canadian elements. Whitetail Institute products are proven in Canada. Plus, Whitetail Institute is the only company that specializes in deer nutrition and deer nutrition alone. I have become fanatical about deer nutrition. I believe I have found the strategy that works best for me in harvesting a mature trophy buck every year. My property now has small half-acre hunting plots up to larger 6-acre feeding plots. The products I use the most are Imperial Whitetail Clover, Chicory Plus and WinterGreens. I also have several mineral lick stations where I regularly disperse 30-06 Mineral/Vitamin supplement directly onto the soil from spring to early fall. Some of the holes they paw into the ground are as much as two feet deep. The story of my first trophy buck begins here. Undertaking a regular pre-rut scouting trip on the property in September three years ago, I began noticing several large rubs and scrapes in a remote area of the property. I set up two cameras on the heavily rubbed trail that led to the food plot. I immediately began getting nice trail pictures of a tall-tined deer with good mass during the fall. I estimated him to be a 150-class 51/2-year-old deer. The area he was using was in a very secluded section of the property to the far west side. I decided to step out of the area and let the buck be for that season. I set up the same two cameras in a small patch of hardwood trees the following October. This was the area where I found the rubs the previous year. It took two weeks before my smart cards revealed my first photos of him. I was so ecstatic to see that he had made it through another season. I was even more excitwww.whitetailinstitute.com