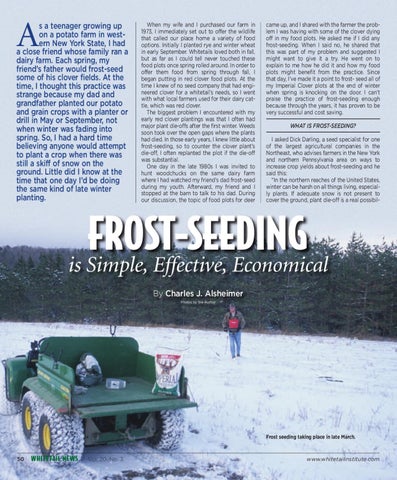 s a teenager growing up on a potato farm in western New York State, I had a close friend whose family ran a dairy farm. Each spring, my friend’s father would frost-seed some of his clover fields. At the time, I thought this practice was strange because my dad and grandfather planted our potato and grain crops with a planter or drill in May or September, not when winter was fading into spring. So, I had a hard time believing anyone would attempt to plant a crop when there was still a skiff of snow on the ground. Little did I know at the time that one day I’d be doing the same kind of late winter planting.

When my wife and I purchased our farm in 1973, I immediately set out to offer the wildlife that called our place home a variety of food options. Initially I planted rye and winter wheat in early September. Whitetails loved both in fall, but as far as I could tell never touched these food plots once spring rolled around. In order to offer them food from spring through fall, I began putting in red clover food plots. At the time I knew of no seed company that had engineered clover for a whitetail’s needs, so I went with what local farmers used for their dairy cattle, which was red clover. The biggest problem I encountered with my early red clover plantings was that I often had major plant die-offs after the first winter. Weeds soon took over the open gaps where the plants had died. In those early years, I knew little about frost-seeding, so to counter the clover plant’s die-off, I often replanted the plot if the die-off was substantial. One day in the late 1980s I was invited to hunt woodchucks on the same dairy farm where I had watched my friend’s dad frost-seed during my youth. Afterward, my friend and I stopped at the barn to talk to his dad. During our discussion, the topic of food plots for deer

came up, and I shared with the farmer the problem I was having with some of the clover dying off in my food plots. He asked me if I did any frost-seeding. When I said no, he shared that this was part of my problem and suggested I might want to give it a try. He went on to explain to me how he did it and how my food plots might benefit from the practice. Since that day, I’ve made it a point to frost- seed all of my Imperial Clover plots at the end of winter when spring is knocking on the door. I can’t praise the practice of frost-seeding enough because through the years, it has proven to be very successful and cost saving. WHAT IS FROST-SEEDING? I asked Dick Darling, a seed specialist for one of the largest agricultural companies in the Northeast, who advises farmers in the New York and northern Pennsylvania area on ways to increase crop yields about frost-seeding and he said this: “In the northern reaches of the United States, winter can be harsh on all things living, especially plants. If adequate snow is not present to cover the ground, plant die-off is a real possibil-

FROST-SEEDING is Simple, Effective, Economical By Charles J. Alsheimer Photos by the Author