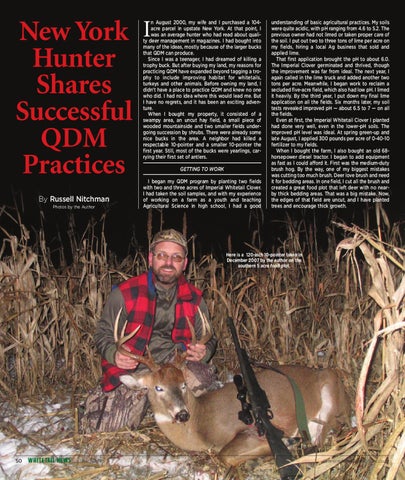 n August 2000, my wife and I purchased a 104acre parcel in upstate New York. At that point, I was an average hunter who had read about quality deer management in magazines. I had bought into many of the ideas, mostly because of the larger bucks that QDM can produce. Since I was a teenager, I had dreamed of killing a trophy buck. But after buying my land, my reasons for practicing QDM have expanded beyond tagging a trophy to include improving habitat for whitetails, turkeys and other animals. Before owning my land, I didn't have a place to practice QDM and knew no one who did. I had no idea where this would lead me. But I have no regrets, and it has been an exciting adventure. When I bought my property, it consisted of a swampy area, an uncut hay field, a small piece of wooded mountainside and two smaller fields undergoing succession by shrubs. There were already some nice bucks in the area. A neighbor had killed a respectable 10-pointer and a smaller 10-pointer the first year. Still, most of the bucks were yearlings, carrying their first set of antlers.

By Russell Nitchman Photos by the Author

I began my QDM program by planting two fields with two and three acres of Imperial Whitetail Clover. I had taken the soil samples, and with my experience of working on a farm as a youth and teaching Agricultural Science in high school, I had a good

understanding of basic agricultural practices. My soils were quite acidic, with pH ranging from 4.6 to 5.2. The previous owner had not limed or taken proper care of the soil. I put out two to three tons of lime per acre on my fields, hiring a local Ag business that sold and applied lime. That first application brought the pH to about 6.0. The Imperial Clover germinated and thrived, though the improvement was far from ideal. The next year, I again called in the lime truck and added another two tons per acre. Meanwhile, I began work to reclaim a secluded five-acre field, which also had low pH. I limed it heavily. By the third year, I put down my final lime application on all the fields. Six months later, my soil tests revealed improved pH â&#x20AC;&#x201D; about 6.5 to 7 â&#x20AC;&#x201D; on all the fields. Even at first, the Imperial Whitetail Clover I planted had done very well, even in the lower-pH soils. The improved pH level was ideal. At spring green-up and late August, I applied 300 pounds per acre of 0-40-10 fertilizer to my fields. When I bought the farm, I also bought an old 68horsepower diesel tractor. I began to add equipment as fast as I could afford it. First was the medium-duty brush hog. By the way, one of my biggest mistakes was cutting too much brush. Deer love brush and need it for bedding areas. In one field, I cut all the brush and created a great food plot that left deer with no nearby thick bedding areas. That was a big mistake. Now, the edges of that field are uncut, and I have planted trees and encourage thick growth.