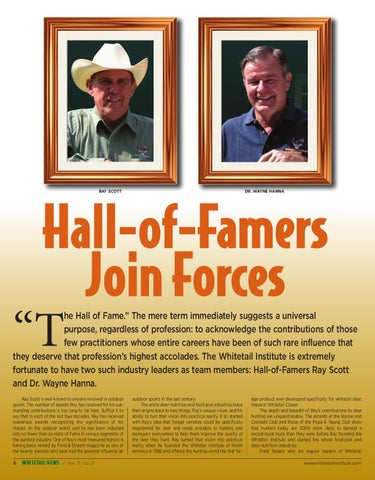 he Hall of Fame.” The mere term immediately suggests a universal purpose, regardless of profession: to acknowledge the contributions of those few practitioners whose entire careers have been of such rare influence that they deserve that profession’s highest accolades. The Whitetail Institute is extremely fortunate to have two such industry leaders as team members: Hall-of-Famers Ray Scott and Dr. Wayne Hanna.

Ray Scott is well-known to anyone involved in outdoor sports. The number of awards Ray has received for his outstanding contributions is too long to list here. Suffice it to say that in each of the last four decades, Ray has received numerous awards recognizing the significance of his impact on the outdoor world, and he has been inducted into no fewer than six Halls of Fame in various segments of the outdoor industry. One of Ray’s most treasured honors is having been named by Field & Stream magazine as one of the twenty persons who have had the greatest influence on 6

outdoor sports in the last century. The entire deer-nutrition and food-plot industries trace their origins back to two things: Ray’s unique vision, and his ability to turn that vision into practical reality. It all started with Ray’s idea that forage varieties could be specifically engineered for deer and made available to hunters and managers everywhere to help them improve the quality of the deer they hunt. Ray turned that vision into practical reality when he founded the Whitetail Institute of North America in 1988 and offered the hunting world the first for-

age product ever developed specifically for whitetail deer, Imperial Whitetail Clover. The depth and breadth of Ray’s contributions to deer hunting are unquestionable. The records of the Boone and Crockett Club and those of the Pope & Young Club show that hunters today are 500% more likely to harvest a record-book buck than they were before Ray founded the Whitetail Institute and started the whole food-plot and deer-nutrition industries. Field Testers who are regular readers of Whitetail www.whitetailinstitute.com