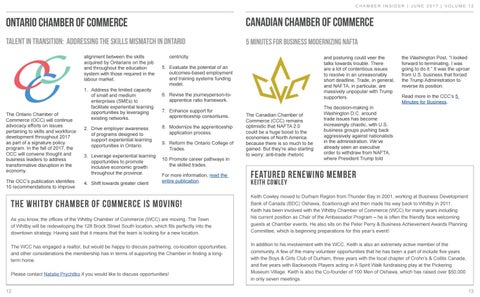 Talent in Transition: Addressing the skills Mismatch in Ontario

alignment between the skills acquired by Ontarians on the job and throughout the education system with those required in the labour market.

The Ontario Chamber of Commerce (OCC) will continue advocacy efforts on issues pertaining to skills and workforce development throughout 2017 as part of a signature policy program. In the fall of 2017, the OCC will convene thought and business leaders to address transformative disruption in the economy. The OCC’s publication identifies 10 recommendations to improve

The whitby chamber of commerce is moving! As you know, the offices of the Whitby Chamber of Commerce (WCC) are moving. The Town of Whitby will be redeveloping the 128 Brock Street South location, which fits perfectly into the downtown strategy. Having said that it means that the team is looking for a new location. The WCC has engaged a realtor, but would be happy to discuss partnering, co-location opportunities, and other considerations the membership has in terms of supporting the Chamber in finding a longterm home. Please contact Natalie Prychitko if you would like to discuss opportunities! 12

and posturing could veer the talks towards trouble. There are a lot of contentious issues to resolve in an unreasonably short deadline. Trade, in general, and NAFTA, in particular, are massively unpopular with Trump supporters. The Canadian Chamber of Commerce (CCC) remains optimistic that NAFTA 2.0 could be a huge boost to the economies of North America because there is so much to be gained. But they’re also starting to worry: anti-trade rhetoric

The decision-making in Washington D.C. around trade issues has become increasingly chaotic, with U.S. business groups pushing back aggressively against nationalists in the administration. We’ve already seen an executive order to withdraw from NAFTA, where President Trump told

the Washington Post, “I looked forward to terminating. I was going to do it.” It was the uproar from U.S. business that forced the Trump Administration to reverse its position. Read more in the CCC’s 5 Minutes for Business.

Keith Cowley moved to Durham Region from Thunder Bay in 2001, working at Business Development Bank of Canada (BDC) Oshawa, Scarborough and then made his way back to Whitby in 2011. Keith has been involved with the Whitby Chamber of Commerce (WCC) for many years including his current position as Chair of the Ambassador Program – he is often the friendly face welcoming guests at Chamber events. He also sits on the Peter Perry & Business Achievement Awards Planning Committee, which is beginning preparations for this year’s event! In addition to his involvement with the WCC, Keith is also an extremely active member of the community. A few of the many volunteer opportunities that he has been a part of include five years with the Boys & Girls Club of Durham, three years with the local chapter of Crohn’s & Colitis Canada, and five years with Backwoods Players acting in A Spirit Walk fundraising play at the Pickering Museum Village. Keith is also the Co-founder of 100 Men of Oshawa, which has raised over $50,000 in only seven meetings. 13 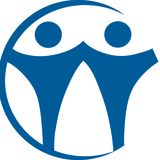