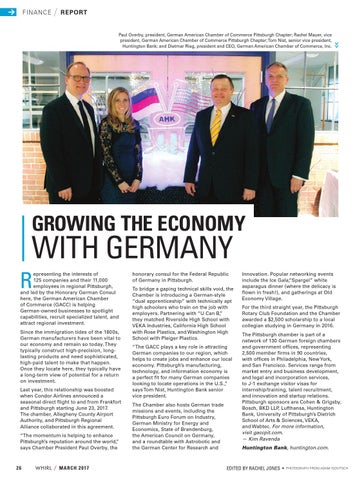 WITH GERMANY epresenting the interests of 125 companies and their 11,000 employees in regional Pittsburgh, and led by the Honorary German Consul here, the German American Chamber of Commerce (GACC) is helping German-owned businesses to spotlight capabilities, recruit specialized talent, and attract regional investment.

Since the immigration tides of the 1800s, German manufacturers have been vital to our economy and remain so today. They typically construct high-precision, longlasting products and need sophisticated, high-paid talent to make that happen. Once they locate here, they typically have a long-term view of potential for a return on investment. Last year, this relationship was boosted when Condor Airlines announced a seasonal direct flight to and from Frankfort and Pittsburgh starting June 23, 2017. The chamber, Allegheny County Airport Authority, and Pittsburgh Regional Alliance collaborated in this agreement. “The momentum is helping to enhance Pittsburgh’s reputation around the world,” says Chamber President Paul Overby, the

honorary consul for the Federal Republic of Germany in Pittsburgh. To bridge a gaping technical skills void, the Chamber is introducing a German-style “dual apprenticeship” with technically apt high schoolers who train on the job with employers. Partnering with “U Can B,” they matched Riverside High School with VEKA Industries, California High School with Rose Plastics, and Washington High School with Pleiger Plastics. “The GACC plays a key role in attracting German companies to our region, which helps to create jobs and enhance our local economy. Pittsburgh’s manufacturing, technology, and information economy is a perfect fit for many German companies looking to locate operations in the U.S.,” says Tom Nist, Huntington Bank senior vice president. The Chamber also hosts German trade missions and events, including the Pittsburgh Euro Forum on Industry, German Ministry for Energy and Economics, State of Brandenburg, the American Council on Germany, and a roundtable with Astrobotic and the German Center for Research and

In this issue: Introducing our 13 under 30, CCAC celebrates 50 years, Kathy Griffin dishes on celebs and the city. 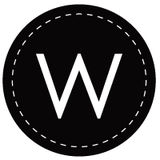