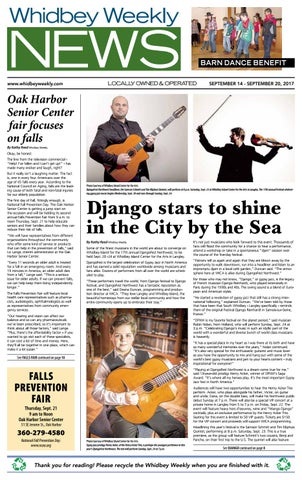 Oak Harbor Senior Center fair focuses on falls By Kathy Reed Whidbey Weekly Okay, be honest. The line from the television commercial “Help! I’ve fallen and I can’t get up!” - has made many snicker and laugh, right? But it really isn’t a laughing matter. The fact is, one in every four Americans over the age of 65 falls every year. According to the National Council on Aging, falls are the leading cause of both fatal and non-fatal injuries for our elderly population. The first day of Fall, fittingly enough, is National Fall Prevention Day. The Oak Harbor Senior Center is getting a jump start on the occasion and will be holding its second annual Falls Prevention Fair from 9 a.m. to noon Thursday, Sept. 21 to help educate seniors and their families about how they can reduce their risk of falls. “We will have representatives from different organizations throughout the community who offer some kind of service or products that can help in the prevention of falls,” said Liz Lange, interim administrator at the Oak Harbor Senior Center. “Every 11 seconds an older adult is treated for a fall in an emergency room. And every 19 minutes in America, an older adult dies from a fall,” Lange said. “This is a serious issue for older adults. If we can prevent falls, we can help keep them living independently longer.” The Falls Prevention Fair will feature local health care representatives such as pharmacists, audiologists, ophthalmologists as well as representatives from community emergency services.

Django stars to shine in the City by the Sea By Kathy Reed Whidbey Weekly Some of the finest musicians in the world are about to converge on Whidbey Island for the 17th annual DjangoFest Northwest, to be held Sept. 20 -24 at Whidbey Island Center for the Arts in Langley. DjangoFest is the largest celebration of Gypsy Jazz in North America and has earned a solid reputation worldwide among musicians and fans alike. Dozens of performers from all over the world are scheduled to play. “These performers travel the world, from Django festival to Django festival, and DjangoFest Northwest has a fantastic reputation as one of the best,” said Deana Duncan, programming and production director at WICA. “They love Langley and Whidbey Island, the beautiful homestays from our stellar local community and how the entire community opens up to embrace their stay.”

“Our hearing and vision can affect our balance and so can any pharmaceuticals we’ve been prescribed, so it’s important to think about all those factors,” said Lange. “Plus, there’s the affordability factor – if you wanted to go visit each of these specialists, it can cost a lot of time and money. Here, they’ll all be together in one place, which can make it a lot easier.”

“Patrons tell us again and again that they are blown away by the opportunity to walk downtown, run into a headliner and listen to an impromptu djam in a local café garden,” Duncan said. “The atmosphere here at WICA is alive during DjangoFest Northwest.” For those who may not know, “Django,” or gypsy jazz, is the legacy of French musician Django Reinhardt, who played extensively in Paris during the 1930s and 40s. The swing sound is a blend of European and American styles. “He started a revolution of gypsy jazz that still has a strong international following,” explained Duncan. “We’ve been told by those that have been that South Whidbey - Langley specifically - reminds them of the original Festival Django Reinhardt in Samois-sur-Seine, France.” “DFNW is my favorite festival on the planet period,” said musician Robin Nolan, from Holland, who will perform Sunday, Sept. 24 at 3 p.m. “Celebrating Django’s music in such an idyllic part of the world with a wonderful and diverse bunch of world class musicians is heavenly. “It has a special place in my heart as I was there at its birth and have so many wonderful memories over the years,” Nolan continued. “It’s also very special for the enthusiastic guitarist and music lover as you have the opportunity to mix and hang out with some of the world’s best gypsy musicians and jam to your hearts content - truly inspirational for everyone!”

“Playing at DjangoFest Northwest is a dream come true for me,” said 13-year-old prodigy Henry Acker, winner of DFNW’s Saga Award. “It’s where all my heroes play. It’s the most important Gypsy Jazz fest in North America.”

Audiences will have two opportunities to hear the Henry Acker Trio perform. Acker, who plays alongside his father, Victor, on guitar and uncle, Dana, on the double bass, will make his Northwest public debut Sunday at 7 p.m. There will also be a special VIP concert at a private home in Langley from 5 to 7 p.m. on Friday, Sept. 22. The event will feature heavy hors d’oeuvres, wine and “Mango Django” cocktails, plus an exclusive performance by the Henry Acker Trio. Seating for this event is limited to 50 VIP guests. Tickets are $150 for the VIP concert and proceeds will support WICA programming.

It’s not just musicians who look forward to this event. Thousands of fans will flood the community for a chance to hear a performance, attend a workshop or take in a spontaneous “djam” session over the course of the five-day festival.

Photo Courtesy of Whidbey Island Center for the Arts Gypsy jazz prodigy Henry Acker, of the Henry Acker Trio, is perhaps the youngest performer in this year’s DjangoFest Northwest. The trio will perform Sunday, Sept. 24 at 7 p.m.

Headlining this year’s festival is the Samson Schmitt and Tim Kliphuis Quintet, performing at 8 p.m. Saturday, Sept. 23. This is a true premiere, as the group will feature Schmitt’s two cousins, Benji and Panche, on their first trip to the U.S. The quintet will also feature

Thank you for reading! Please recycle the Whidbey Weekly when you are finished with it. 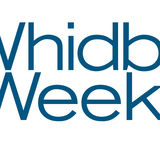