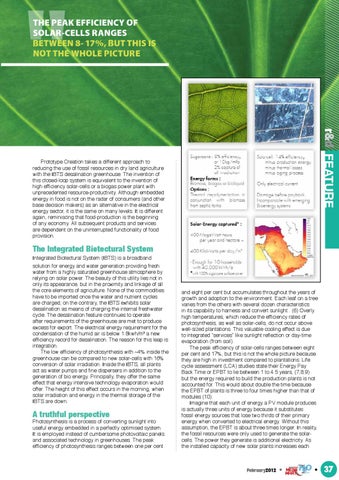 THE PEAK EFFICIENCY OF SOLAR-CELLS RANGES BETWEEN 8- 17%, BUT THIS IS NOT THE WHOLE PICTURE

Prototype Creation takes a different approach to reducing the use of fossil resources in dry land agriculture with the IBTS desalination greenhouse. The invention of this closed-loop system is equivalent to the invention of high efficiency solar-cells or a biogas power plant with unprecedented resource-productivity. Although embedded energy in food is not on the radar of consumers (and other base decision makers) as an alternative in the electrical energy sector, it is the same on many levels. It is different again, reminiscing that food-production is the beginning of any economy. All subsequent products and services are dependent on the uninterrupted functionality of food provision.

solution for energy and water generation providing fresh water from a highly saturated greenhouse atmosphere by relying on solar power. The beauty of this utility lies not in only its appearance, but in the proximity and linkage of all the core elements of agriculture. None of the commodities have to be imported once the water and nutrient cycles are charged; on the contrary, the IBTS exhibits solar desalination as means of charging the internal freshwater cycle. The desalination feature continues to operate after requirements of the greenhouse are met to produce excess for export. The electrical energy requirement for the condensation of the humid air is below 1.8kwh/m³ a new efficiency record for desalination. The reason for this leap is integration. The low efficiency of photosynthesis with ~4% inside the greenhouse can be compared to new solar-cells with 16% conversion of solar irradiation. Inside the IBTS, all plants act as water pumps and fine dispersers in addition to the generation of bio energy. Principally, they offer the same effect that energy intensive technology evaporation would offer. The height of this effect occurs in the morning, when solar irradiation and energy in the thermal storage of the IBTS are down.

Photosynthesis is a process of converting sunlight into useful energy embedded in a perfectly optimised system. It is employed instead of cumbersome photovoltaic panels and associated technology in greenhouses. The peak efficiency of photosynthesis ranges between one per cent

and eight per cent but accumulates throughout the years of growth and adoption to the environment. Each leaf on a tree varies from the others with several dozen characteristics in its capability to harness and convert sunlight . (6) Overly high temperatures, which reduce the efficiency rates of photosynthesis, as well as solar-cells, do not occur above well-sized plantations. This valuable cooling effect is due to integrated “services” like sunlight reflection or day-time evaporation (from soil). The peak efficiency of solar-cells ranges between eight per cent and 17%, but this is not the whole picture because they are high in investment compared to plantations. Life cycle assessment (LCA) studies state their Energy Pay Back Time or EPBT to lie between 1 to 4.5 years, (7,8,9) but the energy required to build the production plants is not accounted for. This would about double the time because the EPBT of plants is three to four times higher than that of modules (10). Imagine that each unit of energy a PV module produces is actually three units of energy because it substitutes fossil energy sources that lose two thirds of their primary energy when converted to electrical energy. Without this assumption, the EPBT is about three times longer. In reality, the fossil resources were only used to generate the solarcells. The power they generate is additional electricity. As the installed capacity of new solar plants increases each