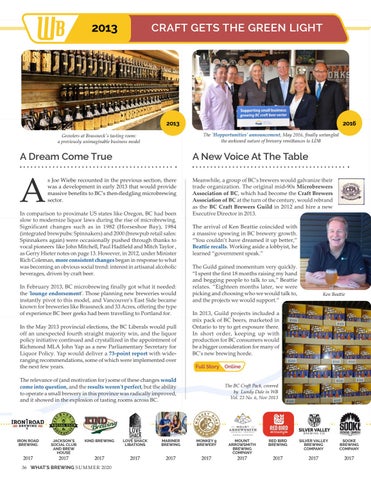 CRAFT GETS THE GREEN LIGHT

2013 The &#39;Hopportunities&#39; announcement, May 2016, finally untangled the awkward nature of brewery remittances to LDB

A New Voice At The Table

s Joe Wiebe recounted in the previous section, there was a development in early 2013 that would provide massive benefits to BC&#39;s then-fledgling microbrewing sector.

In comparison to proximate US states like Oregon, BC had been slow to modernize liquor laws during the rise of microbrewing. Significant changes such as in 1982 (Horseshoe Bay), 1984 (integrated brewpubs: Spinnakers) and 2000 (brewpub retail sales: Spinnakers again) were occasionally pushed through thanks to vocal pioneers like John Mitchell, Paul Hadfield and Mitch Taylor , as Gerry Hieter notes on page 13. However, in 2012, under Minister Rich Coleman, more consistent changes began in response to what was becoming an obvious social trend: interest in artisanal alcoholic beverages, driven by craft beer. In February 2013, BC microbrewing finally got what it needed: the &#39;lounge endorsement&#39;. Those planning new breweries would instantly pivot to this model, and Vancouver&#39;s East Side became known for breweries like Brassneck and 33 Acres, offering the type of experience BC beer geeks had been travelling to Portland for. In the May 2013 provincial elections, the BC Liberals would pull off an unexpected fourth straight majority win, and the liquor policy initiative continued and crystallized in the appointment of Richmond MLA John Yap as a new Parliamentary Secretary for Liquor Policy. Yap would deliver a 73-point report with wideranging recommendations, some of which were implemented over the next few years.

Meanwhile, a group of BC&#39;s brewers would galvanize their trade organization. The original mid-90s Microbrewers Association of BC, which had become the Craft Brewers Association of BC at the turn of the century, would rebrand as the BC Craft Brewers Guild in 2012 and hire a new Executive Director in 2013. The arrival of Ken Beattie coincided with a massive upswing in BC brewery growth. “You couldn’t have dreamed it up better,” Beattie recalls. Working aside a lobbyist, he learned “government speak.” The Guild gained momentum very quickly. “I spent the first 18 months raising my hand and begging people to talk to us,” Beattie relates. “Eighteen months later, we were picking and choosing who we would talk to, and the projects we would support.” In 2013, Guild projects included a mix pack of BC beers, marketed in Ontario to try to get exposure there. In short order, keeping up with production for BC consumers would be a bigger consideration for many of BC&#39;s new brewing horde. Full Story

The relevance of (and motivation for) some of these changes would come into question, and the results weren&#39;t perfect, but the ability to operate a small brewery in this province was radically improved, and it showed in the explosion of tasting rooms across BC. 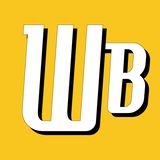