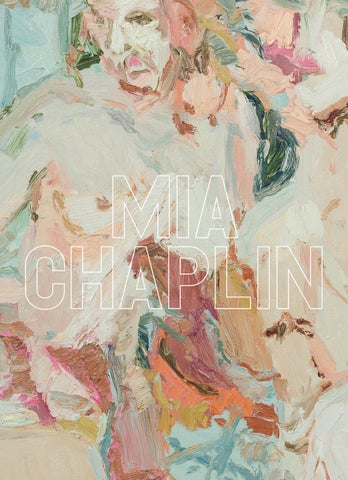 Nude with a Poodle Ascending a Staircase, 2020

Mia Chaplin’s iconography teeters between embracing ‘femininity’ as it is established by the Western canon, and siding with its impertinent and unruly nemesis. Tropes of the passive and pretty-in-pink little girl are put to rest along with the homemaker, maternal instincts, virginity, duty, and the weighted responsibility that comes with being assigned. Two feminine archetypes that Chaplin often presents are those of the foreboding, beguiled damsel and the dangerously vengeful woman. She references historical paintings such as Pietro Liberi’s Diana and Callisto (1670) 1 and Artemisia Gentileschi’s Judith Beheading Holofernes (1620–1621) 2 almost to the point of parody. When translated into contemporaneity, these scenes become memetic replicas of a bygone era, and bare the absurdity of the inveterate inclination to uphold such archetypes. Particularly in South Africa, where gender-based violence, ‘curative’ rape, hate crimes, and rampant femicide causes fresh horror daily, these stereotypes feed into social behaviours such as victim-blaming, scapegoating, perpetrator advocacy, and ongoing issues of misogyny, sexism, racism, transphobia, queerphobia, xenophobia, and ableism. Chaplin gives testament to both the resilience and resentment of women and feminine-of-centre persons living in South Africa and the world. Offering a complex insight into femininity as both choice and faux pas rather than a precondition. She creates a narrative of womanhood and femininity that is complex: it is all at once ugly, violent, comforting, and containing. It reflects the journey of coming to terms with positioning oneself within an historical context. Of being uncertain and angry, but also finding familiarity, beauty, and connection within the baptismal font that as women, we’ve have been sanctimoniously immersed in, and told not only to float, but perform, excel, and to never deviate from. The most symbolic of this journey, are Chaplin’s sculptural works. Loosely shaped after vases and urns, these wire frames are covered in papier-mâché and plaster of paris, and finished with oil paint. Although doused with rich impasto and flowers, these reveal rigorous socio-political commentary and a more sinister underbelly. One poignant inclusion to Chaplin’s visual lexicon of signs is a little black dog, as seen in Double Fantasy (2020) and Shoulders Drop (2020). Attributed to the phrase “The Black Dog”, the symbol refers to depression. In accordance to Jean-Paul Satre’s theorisation of semiology (Richards, 2008:11-28) 3 , this is an example of the weightiness of signs and what they communicate through their subtleties. The ‘Bad Women’ archetype is recurrently symbolised by as an alternative heroine to the idealised woman, as seen in sculptures Tough Girl Rebellion (2019) and Lost Women (2020). This character materialises through cigarettes, rats, bleach bottles, glasses of wine, daggers, blood, serpents, and beady eyes. These bad omens co-exist

with the dreamlike frivolity of reclining nudes, stargazer lilies, ribbons, and clouds. Rather than reading these as polarities, Chaplin creates all-inclusive and imperfect totems to women. In Double Fantasy (2020), the ideograph of a heart shape and freshly bloomed roses intersect with a demonic dragon figure, cockroach, and hammer. In her zine, On Being Hard-Femme (2009) 4 , Jackie Wang writes about her discovery of the term ‘hard-femme’. Largely popularised by the queer and lesbian community, the term describes a person who embraces both masculine and feminine behaviours, aesthetics, and performances. Narrating an experience between herself and her girlfriend, Wang says: “I’d stand in front of the mirror making an angry ‘fuck off!’ face while flexing my biceps and we’d laugh at my pseudo macho-ism (Wang, 2009:7-8).” She adopts hyper-masculine expressions in response to the learnt shame of being feminine, of being systemically synonymous with weakness – delicate, poised, subservient, fragile, passive. Much like Wang, Chaplin’s ‘bad girl’ motif embraces behaviours typically associated with the masculine as a way of counteracting feelings of powerlessness. Her role is to undermine impossible societal expectations placed on women by being imperfect, assertive, and decisive. She expresses anger as a way of validating pain, working towards healing and empowerment.

Refreshingly, Chaplin also depicts her own waning sense of ‘womanhood’, as seen by Growing Older, Turning Colder (2020). The work strips the rosey tint of being an all-sacrificing woman, and rather welcomes frosty demeanours as a response to institutional and personal injustice. Through text and imagery, Chaplin transfers stories of over-coming, and finding community in a shared narrative. The women who occupy this surface are disenchanted, unmoved — cold. One figure slouches in her underwear, hands on hips, frowning; she looks both powerful and incredibly mundane. A snake and evil eye circling around her suggest that this ‘unpleasantness’ is a mechanism of distrust, perhaps a nudge to Eve’s expulsion from the Garden of Eden. Women’s positioning as either saints or sinners and the mythological correlation this has to the Garden of Eden is explored in works such as The Oral Drive (2018), Puppy Love (2018), and Unsex Me Here (2018). Chaplin explores nature’s representation as a woman throughout language, literature, and art history. ‘Mother Nature’ has been feminised as a beautiful and fertile muse. In Early classical mythological, goddesses were connected to nature — as seen by Sandro Botticelli’s The Birth of Venus (1485–1486) 5 — and in High Romaticism, nature functioned as an access point to the masculine sublime 6 . However, nature is also perceived as easily antagonised, uncontrollable, treacherous, and violent; natural disasters such as hurricanes, for example, are named after women. Nature, like women, is either celebrated or eschewed. It is this kind

of disenfranchisement and damnation that Chaplin, like many women, finds so frustrating. In The Damned (2020), the artist uses pyramidal composition to draw our eyes from a sprawled figure, being touched or touching herself intimately; to a women in a quintessential ‘damsel in distress’ posture; and then across to three alert, bobbing heads either surveying their territory or guarding their troop. Referencing Peter Paul Rubens’ drawing for The Fall of the Damned (1614/1618) 7, which portrays those declared guilty following God’s final judgement, sinking and being hauled by demons towards Hell. This work summarises the anxieties of womanhood, particularly in South Africa. Chaplin guides us through the complexity of being assigned as doomed.

A more recent style of the artist’s embraces a cubist fragmentation of the pictorial plane, and obfuscation of foreground and background. This is most identifiably seen in her work, Nude with a Poodle Ascending the Staircase (2020), a reference to Marcel Duchamp’s Nu descendant un escalier n° 2 (*Nude Descending a Staircase, No. 2) (1912) 8 . The limbs and torso of Chaplin’s nude fracture and overlap across the surface; at times represented only by a swatch of colour. The work is an intriguing direction for Chaplin, whose style has previously shown a post-impressionist affiliation, while her sculptural papier-mâché works present the odalisques of exotic Romanticism 9 and the Italian Renaissance’s Venuses in pudica pose10 . Chaplin seems to conflate these eras, the latter being unattainably hyperfeminine and the former, effortlessly masculine. Dotted lines form in circles around the pelvic area of the the figure, signifying the motion of thrusting11 . This action in itself is gendered. The term ‘thrusting’ is used in the context of sex, violence, and military: ie. within the context of masculine dominance. Duchamp’s gender declaration, seen by his use of the male pronoun “nu” in his title, is almost humorously unnecessary, as the nude’s gender is so glaringly prescribed by its anonymity and representation as an invisible, normalised body. In contrast, Chaplin’s figure bares the signifier of a bulging pregnant belly; she is physically altered to be read, albeit reductively, as a “woman”. While Duchamp’s male nude can be read as a baseline for stylistic expression — merely ‘a figure’ to be altered— Chaplin’s insertion of a pregnant women, does not go unnoticed. In this way, her practice is both guided and plagued by constructed femininity. Chaplin’s Blue Lovers (2020) is another Modernist pastiche; this time of Pablo Picasso’s Les Demoiselles d’Avignon (*The Young Ladies of Avignon, originally titled The Brothel of Avignon) (1907) 12 .

Much like Picasso’s work, Blue Lovers is confronting in its portrayal of unconventional femininity. The daunting figure that edges forward in the top right corner of Chaplin’s rendition has a malformed face, similar to the Southern Asian, Iberian, and African mask-like features of the women portrayed by Picasso. Chaplin’s figure loses its affinity not only of being feminine, but of being human and begins to read as uncanny, aesthetically unattractive, repulsive, or even offensive. Almost resembling a ventriloquist puppet, the figure is non-placeable; it fails to signify as any particular gender, as human, or as living. And yet, this subject, or “thing” is sexualised. Their smirk is turned downwards and their eyes are narrowed; they appear displeased, yet, still strangely alluring. This trait, of the deranged sex-bomb, is one that comes up often in Chaplin’s imagery, and is fed directly by the artist’s acerbic humour. Such an example of Chaplin’s wit, is the painting Sunbather which forms part of a larger series of nude portraits that host a likeness to Edgar Degas’s voyeuristic bathing series13 . Previous renditions in the series show a smooth-skinned, lolling woman in a private moment of bliss; She is sunbathing naked, uninhibited. The tone of Sunbather I (2016) and Sunbather II (2016) defer quite drastically to the gnarled monstrous “thing” shown in her 2018 version. The latter hosts an eerie resemblance to Francisco Goya’s Saturn Devouring His Son (1819-23) 14 , as the figure appears to be mauling at some form in their hands; or are they holding flowers? Chaplin’s sharp, biting sensibility creates the space for viewer participation. And it is this underlying cynicism that reflects Chaplin’s categorical denial to be read as ‘feminine’. Pink is for Girls (2019) is a work that feeds into this rejection of “girlishess”, and perhaps more pertinently to Chaplin, her categorisation as a youthful, feminine figurative painter. In an attempt to pull herself away from this essentialism, she couples beauty with the grotesque, uncanny, and repulsive. The corporality of Chaplin’s paintings alone —their fleshy crudeness and squeaky, elasticised touch — makes them abject, or living, creating a sense of unease as well as familiarity. Writer and theorist Maggie Nelson states in The Argonauts that, “To be femme is to give honour where there has been shame (Nelson, 2015:31-32).” Chaplin’s complex use of symbolism and tactile style, feed into this honour. Much like her work titled Soothe (2020), Chaplin’s practice is an intimate journey of ‘self-soothing’ and healing.

Mia Chaplin (b.1990 South Africa) is a painter who lives and works in Cape Town. Working in oil on canvas and paper, her highly expressive works are characterised by their rich impasto surfaces and visible brushstrokes. Chaplin’s most recent works emphasize a muted colour palette of pink fleshy tones and golden highlights. Consisting of still lifes, figure studies and landscapes, her work seems to meditate on the familiar. Her loose, erratic style of painting – synonymous with that of the impressionists – is intuitive, heightening the emotionality of her pieces. They communicate a sense of estrangement; reflecting a detachment between the self and her surroundings. Her works sway between voyeurism and intimate interaction, while remaining consistently self-referential. Since completing her BFA at the Michaelis School of Fine Art in Cape Town in 2011, Chaplin has hosted four solo exhibitions, Mouth (2018), Under a Boiling River (2017) and Binding Forms (2016), with WHATIFTHEWORLD and most recently, Underbelly (2019), with No Man’s Art Gallery in Amsterdam. She has furthermore extended her painting practice into printmaking, hosting a mini-exhibition of monotypes from the series, The Making of a Sharp Blade (2017), in collaboration with Warren Editions, Cape Town. Chaplin has completed artist residency programmes at Cité Internationale Des Artes in the Marais district, Paris (2018), Nirox Arts Foundation in Johannesburg, South Africa (2016) and at OBRAS Foundation in Alentejo, Portugal (2015).

ARTWORK DETAILS (in order of appearance) 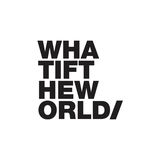