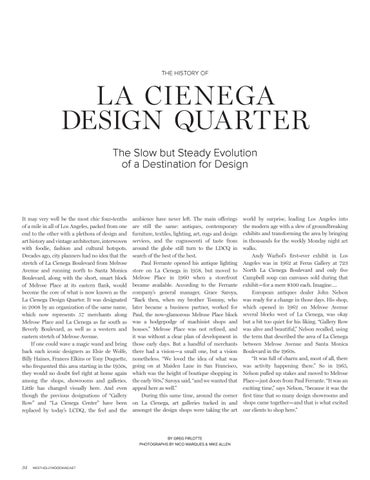 It may very well be the most chic four-tenths of a mile in all of Los Angeles, packed from one end to the other with a plethora of design and art history and vintage architecture, interwoven with foodie, fashion and cultural hotspots. Decades ago, city planners had no idea that the stretch of La Cienega Boulevard from Melrose Avenue and running north to Santa Monica Boulevard, along with the short, smart block of Melrose Place at its eastern flank, would become the core of what is now known as the La Cienega Design Quarter. It was designated in 2008 by an organization of the same name, which now represents 57 merchants along Melrose Place and La Cienega as far south as Beverly Boulevard, as well as a western and eastern stretch of Melrose Avenue. If one could wave a magic wand and bring back such iconic designers as Elsie de Wolfe, Billy Haines, Frances Elkins or Tony Duquette, who frequented this area starting in the 1950s, they would no doubt feel right at home again among the shops, showrooms and galleries. Little has changed visually here. And even though the previous designations of “Gallery Row” and “La Cienega Center” have been replaced by today’s LCDQ, the feel and the

ambience have never left. The main offerings are still the same: antiques, contemporary furniture, textiles, lighting, art, rugs and design services, and the cognoscenti of taste from around the globe still turn to the LDCQ in search of the best of the best. Paul Ferrante opened his antique lighting store on La Cienega in 1958, but moved to Melrose Place in 1960 when a storefront became available. According to the Ferrante company’s general manager, Grace Saroya, “Back then, when my brother Tommy, who later became a business partner, worked for Paul, the now-glamorous Melrose Place block was a hodgepodge of machinist shops and houses.” Melrose Place was not refined, and it was without a clear plan of development in those early days. But a handful of merchants there had a vision—a small one, but a vision nonetheless. “We loved the idea of what was going on at Maiden Lane in San Francisco, which was the height of boutique shopping in the early ’60s,” Saroya said, “and we wanted that appeal here as well.” During this same time, around the corner on La Cienega, art galleries tucked in and amongst the design shops were taking the art

world by surprise, leading Los Angeles into the modern age with a slew of groundbreaking exhibits and transforming the area by bringing in thousands for the weekly Monday night art walks. Andy Warhol’s first-ever exhibit in Los Angeles was in 1962 at Ferus Gallery at 723 North La Cienega Boulevard and only five Campbell soup can canvases sold during that exhibit—for a mere $100 each. Imagine…. European antiques dealer John Nelson was ready for a change in those days. His shop, which opened in 1962 on Melrose Avenue several blocks west of La Cienega, was okay but a bit too quiet for his liking. “Gallery Row was alive and beautiful,” Nelson recalled, using the term that described the area of La Cienega between Melrose Avenue and Santa Monica Boulevard in the 1960s. “It was full of charm and, most of all, there was activity happening there.” So in 1965, Nelson pulled up stakes and moved to Melrose Place—just doors from Paul Ferrante. “It was an exciting time,” says Nelson, “because it was the first time that so many design showrooms and shops came together—and that is what excited our clients to shop here.”