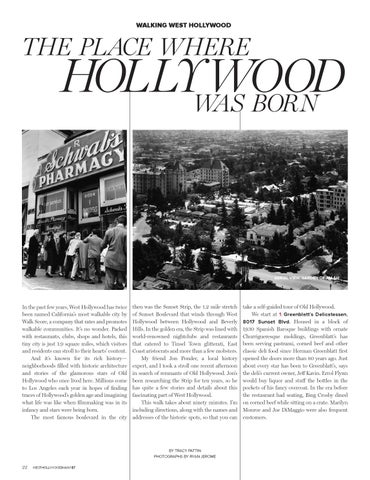 In the past few years, West Hollywood has twice been named California’s most walkable city by Walk Score, a company that rates and promotes walkable communities. It’s no wonder. Packed with restaurants, clubs, shops and hotels, this tiny city is just 1.9 square miles, which visitors and residents can stroll to their hearts’ content. And it’s known for its rich history— neighborhoods filled with historic architecture and stories of the glamorous stars of Old Hollywood who once lived here. Millions come to Los Angeles each year in hopes of finding traces of Hollywood’s golden age and imagining what life was like when filmmaking was in its infancy and stars were being born. The most famous boulevard in the city

then was the Sunset Strip, the 1.2 mile stretch of Sunset Boulevard that winds through West Hollywood between Hollywood and Beverly Hills. In the golden era, the Strip was lined with world-renowned nightclubs and restaurants that catered to Tinsel Town glitterati, East Coast aristocrats and more than a few mobsters. My friend Jon Ponder, a local history expert, and I took a stroll one recent afternoon in search of remnants of Old Hollywood. Jon’s been researching the Strip for ten years, so he has quite a few stories and details about this fascinating part of West Hollywood. This walk takes about ninety minutes. I’m including directions, along with the names and addresses of the historic spots, so that you can

take a self-guided tour of Old Hollywood. We start at 1. Greenblatt’s Delicatessen, 8017 Sunset Blvd. Housed in a block of 1930 Spanish Baroque buildings with ornate Churrigueresque moldings, Greenblatt’s has been serving pastrami, corned beef and other classic deli food since Herman Greenblatt first opened the doors more than 80 years ago. Just about every star has been to Greenblatt’s, says the deli’s current owner, Jeff Kavin. Errol Flynn would buy liquor and stuff the bottles in the pockets of his fancy overcoat. In the era before the restaurant had seating, Bing Crosby dined on corned beef while sitting on a crate. Marilyn Monroe and Joe DiMaggio were also frequent customers.