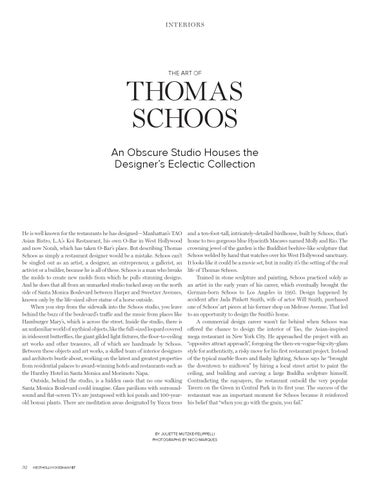 He is well known for the restaurants he has designed—Manhattan’s TAO Asian Bistro, L.A.’s Koi Restaurant, his own O-Bar in West Hollywood and now Norah, which has taken O-Bar’s place. But describing Thomas Schoos as simply a restaurant designer would be a mistake. Schoos can’t be singled out as an artist, a designer, an entrepreneur, a gallerist, an activist or a builder, because he is all of these. Schoos is a man who breaks the molds to create new molds from which he pulls stunning designs. And he does that all from an unmarked studio tucked away on the north side of Santa Monica Boulevard between Harper and Sweetzer Avenues, known only by the life-sized silver statue of a horse outside. When you step from the sidewalk into the Schoos studio, you leave behind the buzz of the boulevard’s traffic and the music from places like Hamburger Mary’s, which is across the street. Inside the studio, there is an unfamiliar world of mythical objects, like the full-sized leopard covered in iridescent butterflies, the giant gilded light fixtures, the floor-to-ceiling art works and other treasures, all of which are handmade by Schoos. Between these objects and art works, a skilled team of interior designers and architects bustle about, working on the latest and greatest properties from residential palaces to award-winning hotels and restaurants such as the Huntley Hotel in Santa Monica and Morimoto Napa. Outside, behind the studio, is a hidden oasis that no one walking Santa Monica Boulevard could imagine. Glass pavilions with surroundsound and flat-screen TVs are juxtaposed with koi ponds and 100-yearold bonsai plants. There are meditation areas designated by Yucca trees

and a ten-foot-tall, intricately-detailed birdhouse, built by Schoos, that’s home to two gorgeous blue Hyacinth Macaws named Molly and Rio. The crowning jewel of the garden is the Buddhist beehive-like sculpture that Schoos welded by hand that watches over his West Hollywood sanctuary. It looks like it could be a movie set, but in reality it’s the setting of the real life of Thomas Schoos. Trained in stone sculpture and painting, Schoos practiced solely as an artist in the early years of his career, which eventually brought the German-born Schoos to Los Angeles in 1995. Design happened by accident after Jada Pinkett Smith, wife of actor Will Smith, purchased one of Schoos’ art pieces at his former shop on Melrose Avenue. That led to an opportunity to design the Smith’s home. A commercial design career wasn’t far behind when Schoos was offered the chance to design the interior of Tao, the Asian-inspired mega restaurant in New York City. He approached the project with an “opposites attract approach”, foregoing the then-en-vogue-big-city-glam style for authenticity, a risky move for his first restaurant project. Instead of the typical marble floors and flashy lighting, Schoos says he “brought the downtown to midtown” by hiring a local street artist to paint the ceiling, and building and carving a large Buddha sculpture himself. Contradicting the naysayers, the restaurant outsold the very popular Tavern on the Green in Central Park in its first year. The success of the restaurant was an important moment for Schoos because it reinforced his belief that “when you go with the grain, you fail.”