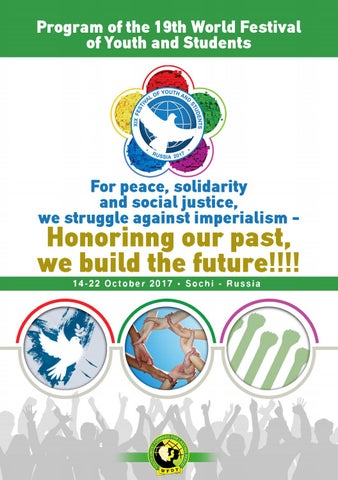 Program of the XIX World Festival of Youth and Students Dear Friends, Progressive Youth of the World, In this Web Bulletin you can find the program of the XIX World Festival of Youth and Students (WFYS). As it was approved by the 1st International Preparatory Meeting (IPM) held in Caracas in June 2016, the XIX WFYS will take place in Sochi - Russia between the dates 14-22 of October 2017 under the Slogan “For Peace, Solidarity and Social Justice, we struggle against Imperialism – Honoring our past, we build the future!!”. The thematics, seminars and conferences of the program were approved by the 2nd IPM held in Windhoek – Namibia between the dates 15 – 18 of November 2016. Additional seminars and workshops will be under discussion during the 3rd IPM where the program of the XIX WFYS will be finalized with the addition of the sports and cultural activities. The program of the festival as it is formulated covers all the areas of youth action. As you will realize by reading its context it provides the space for discussion in various aspects during the whole of the days of the WFYS. The thematics are not resticted to one single day, they are spread on an everyday basis due to the fact that the seminars connected to them are distributed in all the days of the Festival. Further, every region will have the space in one day to develop various workshops connected to the reality and the conditions of its youth and people. Within the XIX WFYS the progressive youth of the World will commemorate the tiumph of the 100th Anniversary of the Great October Socialist Revolution, on the same time that they will dedicate the festival to Ernesto Che Guevara and Mohamed Abdalaziz. It is also signifigant that by 2017 the WFYS completes 70 years of life. The call of the XIX is addressed to every youth of the world that is aiming to fight against imperialism, for peace and solidarity. The friendship of those youth is one of the aims of the WFYS. In a world where imperialism seems to be inevitable, through the WFYS the youth shall provide the alternative of a united struggle, against the imperialistic wars and the military interventions, against the economic terrorism, against the imperialist sanctions and blockades, against facism, racism, xenophobia and discrimination, against poverty and exploitation, for peace, solidarity, friendship and for free universal access to education. Nikolas Papadimitriou President of World Federation of Democratic Youth 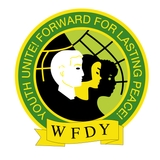 This is a Bulletin in relation with the XIX WFYS

This is a Bulletin in relation with the XIX WFYS