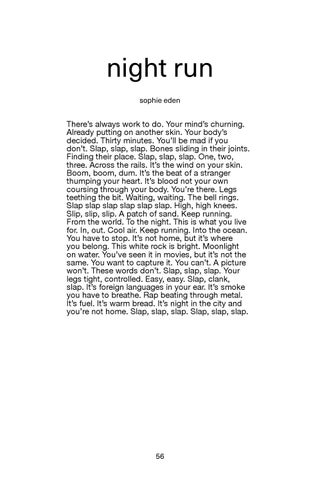 There’s always work to do. Your mind’s churning. Already putting on another skin. Your body’s decided. Thirty minutes. You’ll be mad if you don’t. Slap, slap, slap. Bones sliding in their joints. Finding their place. Slap, slap, slap. One, two, three. Across the rails. It’s the wind on your skin. Boom, boom, dum. It’s the beat of a stranger thumping your heart. It’s blood not your own coursing through your body. You’re there. Legs teething the bit. Waiting, waiting. The bell rings. Slap slap slap slap slap slap. High, high knees. Slip, slip, slip. A patch of sand. Keep running. From the world. To the night. This is what you live for. In, out. Cool air. Keep running. Into the ocean. You have to stop. It’s not home, but it’s where you belong. This white rock is bright. Moonlight on water. You’ve seen it in movies, but it’s not the same. You want to capture it. You can’t. A picture won’t. These words don’t. Slap, slap, slap. Your legs tight, controlled. Easy, easy. Slap, clank, slap. It’s foreign languages in your ear. It’s smoke you have to breathe. Rap beating through metal. It’s fuel. It’s warm bread. It’s night in the city and you’re not home. Slap, slap, slap. Slap, slap, slap. Westwind: UCLA's Journal of the Arts