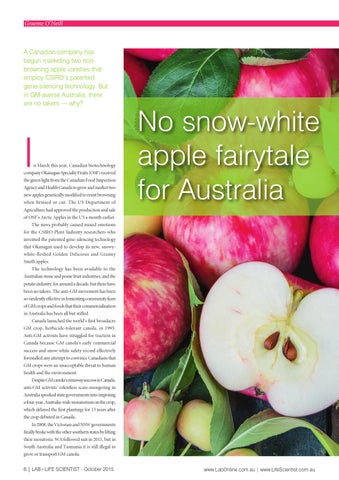 A Canadian company has begun marketing two nonbrowning apple varieties that employ CSIRO’s patented gene-silencing technology. But in GM-averse Australia, there are no takers — why?

company Okanagan Specialty Fruits (OSF) received the green light from the Canadian Food Inspection Agency and Health Canada to grow and market two new apples genetically modified to resist browning when bruised or cut. The US Department of

No snow-white apple fairytale for Australia

Agriculture had approved the production and sale of OSF’s Arctic Apples in the US a month earlier. The news probably caused mixed emotions for the CSIRO Plant Industry researchers who invented the patented gene-silencing technology that Okanagan used to develop its new, snowywhite-fleshed Golden Delicious and Granny Smith apples. The technology has been available to the Australian stone and pome fruit industries, and the potato industry, for around a decade, but there have been no takers. The anti-GM movement has been so virulently effective in fomenting community fears of GM crops and foods that their commercialisation in Australia has been all but stifled. Canada launched the world’s first broadacre GM crop, herbicide-tolerant canola, in 1995. Anti-GM activists have struggled for traction in Canada because GM canola’s early commercial success and snow-white safety record effectively forestalled any attempt to convince Canadians that GM crops were an unacceptable threat to human health and the environment. Despite GM canola’s runaway success in Canada, anti-GM activists’ relentless scare-mongering in Australia spooked state governments into imposing a four-year, Australia-wide moratorium on the crop, which delayed the first plantings for 13 years after the crop debuted in Canada. In 2008, the Victorian and NSW governments finally broke with the other southern states by lifting their moratoria. WA followed suit in 2011, but in South Australia and Tasmania it is still illegal to grow or transport GM canola.