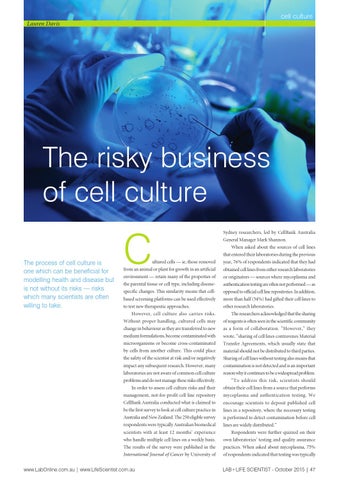 Sydney researchers, led by CellBank Australia General Manager Mark Shannon. When asked about the sources of cell lines that entered their laboratories during the previous

year, 76% of respondents indicated that they had

from an animal or plant for growth in an artificial

environment — retain many of the properties of

or originators — sources where mycoplasma and

the parental tissue or cell type, including disease-

authentication testing are often not performed — as

based screening platforms can be used effectively

more than half (54%) had gifted their cell lines to

The researchers acknowledged that the sharing

Without proper handling, cultured cells may

of reagents is often seen in the scientific community

change in behaviour as they are transferred to new

as a form of collaboration. “However,” they

Transfer Agreements, which usually state that

by cells from another culture. This could place

material should not be distributed to third parties.

the safety of the scientist at risk and/or negatively

Sharing of cell lines without testing also means that

impact any subsequent research. However, many

contamination is not detected and is an important

laboratories are not aware of common cell culture

reason why it continues to be a widespread problem.

problems and do not manage these risks effectively.

“To address this risk, scientists should

In order to assess cell culture risks and their

obtain their cell lines from a source that performs

mycoplasma and authentication testing. We

CellBank Australia conducted what is claimed to

be the first survey to look at cell culture practice in

lines in a repository, where the necessary testing

is performed to detect contamination before cell

scientists with at least 12 months’ experience

Respondents were further quizzed on their

who handle multiple cell lines on a weekly basis.

own laboratories’ testing and quality assurance

The results of the survey were published in the

practices. When asked about mycoplasma, 75%

International Journal of Cancer by University of

of respondents indicated that testing was typically